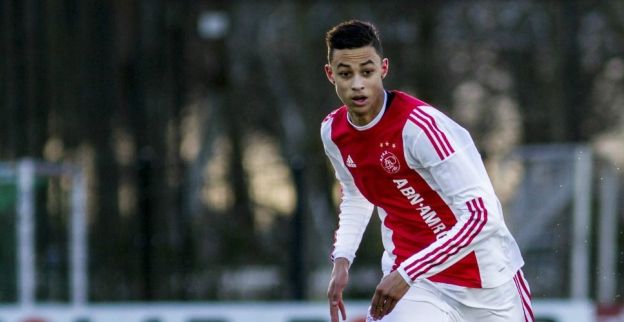 What a catch!!
Jose Mourinho has signed a teenager and it has actually happened… isn’t that out of the ordinary? Well if so this kid must surely have some special talent to be chosen by the Special One himself or that is what the guess is. 16 year old Mileen Baars has completed a move to Manchester United today, refusing to join Premier League rivals Arsenal, which would have surely broken Arsene Wenger’s heart.
The young Ajax starlet reportedly wanted a move to Old Trafford from the Dutch side in the recent few weeks.
Mourinho made sure he obliged. It was discovered that Baars wanted a move to the Manchester outfit at the beginning of the year in January but an international clearance was required from the wonder-kid.
Baars has caught the eye of many Premier League clubs including Chelsea, Arsenal and Manchester City, however they have won the four horse race to secure the services of a so called prodigy.
He has been renowned to possess a flair of technical ability that the likes of the Dutch greats such as Bergkamp and Nistelrooy. Deemed to be a professionally skillful winger, he has also added pace and trickery to his system with a lethal left-foot.
His father had told news outlets almost a year ago that’  “We have had talks with Ajax that were between Millen and the club. Ajax is a great club with a very good youth system, but they can unfortunately not cope so very well.”
He also mentioned, “You saw in the past with other youth players who now play at other clubs. But Millen was ready for a different challenge. There was interest from Italy, Portugal and England, but when he was at Chelsea and United to look, he knew he wanted to play in Manchester.”

Baars had been a part of Ajax’s youth academy and was scouted for United by Marcel Bout last year. Bout was then working under Louis van Gaal at the time. He continued to work under Jose Mourinho as well and the Portuguese manager kept up his interest.
The Red Devils also have a history of recruiting players from the Dutch side. Having snapped up utility defender Daley Blind from Ajax to Old Trafford in 2014, Timothy Fosu Mensah also joined United and is termed to be a massive player for the club.
However, it is unlikely that Baars would receive any first team football for a while; the united fans will surely be excited by a new prospect at the club. More so, as he rejected the Premier League rivals to join the Theater of Dreams.
The critics-
Mourinho’s critics have always said that the Portuguese manager does not encourage the signing and development of youngsters, to an extent as much as other managers might be doing. The former Chelsea and Real Madrid boss is not too keen on rotation, as it has been said over the years, though he does seem to have modified that policy a bit in recent times.
As the years have gone by, Mourinho has made changes for the domestic cups, where he has given unused players an opportunity to represent the Blues in the past and the same might be possible now with the Red Devils.
Whatever be the case, like our FB page and keep track of the latest happenings in the world of football.
Share
Facebook
Twitter
Pinterest
WhatsApp
Previous articleThe Transfer Saga That Could Change The Face Of Arsenal’s Midfield For Good
Next articleShocking: Liverpool To Spend Around £70m On This Midfield Superstar?