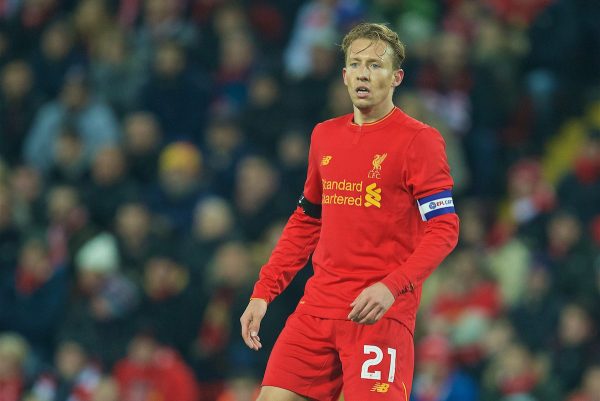 Jurgen Klopp has granted Liverpool midfielder Lucas Leiva the opportunity to leave the club and a deal has been agreed with Lazio. According to reports, a transfer has already been agreed upon by the Italian club over the Reds’ man. A fee of around £5m is set to be the agreement between the two clubs.
Lucas was into the final 12 months of his contract at Anfield, when the decision was made and the club had not offered him a new deal. As he was facing few uncertainties over his future, Lazio’s keen interest in bringing Lucas to the Stadio Olimpico did the trick.
The Brazilian spent 10 years with the Merseyside outfit and played key roles many times, at the base of the midfield in almost every season.
However, as Klopp looks to form a younger and fast playing squad, it looks like the 30 year old is being shown the exit door.
Lucas has been renowned for his hard tackling and solidness in midfield, not being particularly quick or skillful, which is quite extraordinary for a footballer of his native, he is an efficient defensive minded deemed with tactical intelligence and reading of the game.
Not many players like to track back and defend, but Lucas is the kind who puts in a shift of the so called ‘dirty-work’ every time he plays which also speaks of his stamina.
He was never a player of the creative type but is robust and energetic in nature, which always sets the tempo of the game. Lucas can also be deployed as a centre-back, if needed to play in a defensive role.
The former Brazilian international was not in the Liverpool squad that faced Wigan and in a post-match conference, manager Jurgen Klopp was asked about the rumors around Lucas to which he stated, “I am not 100 percent sure what I can say about this because I am not exactly sure how it is in this moment.”
Klopp had added back then, “But I think in all respect for Lucas and his fantastic time at Liverpool, we should talk about facts and not about rumours. We have to wait. I am not sure.  Yes, maybe something, maybe not. That is pretty much like last year and half a year ago, isn’t it? We will see.”
When he arrived to Liverpool from Brazilian club Gremio in 2007, he wasn’t particularly liked by many of the Anfield faithful due to his sluggishness, but after each season he grew as a player and the veteran was among the favorites of the Kop.
He won the hearts of the fans, not just with his commitment to the club, but loyalty as well, making a total of 346 appearances for them and won the Carling Cup in 2012.
Life beyond Lucas at Anfield-
The loss of losing a loyal soldier will always be a huge one, though Klopp does have the stars who can help him build a strong team in the days to come. In case, the German manger does feel that he needs more stars, he can surely look to buy them now, while the transfer window is still open.
Our Facebook page has more than 17k likes now and is growing quite rapidly. Do like it for the latest updates on the world of football.
Share
Facebook
Twitter
Pinterest
WhatsApp
Previous articleMikael Silvestre States That Manchester United Already Have Their Own “Kylian Mbappe”
Next articlePremier League Outfit Confirms Signing Of Former Manchester United Star