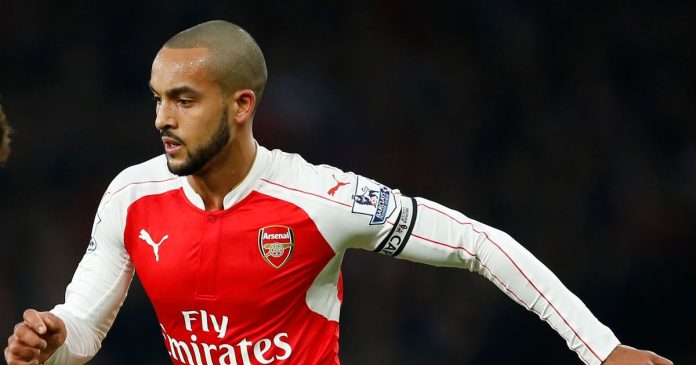 The Story-
Arsenal forward has drawn comparison to new club signing Alexandre Lacazette to veteran English striker Jermain Defoe. Lacazette completed a move from Lyon to north London this week for a club record transfer of £52m. Arsenal fans will be hoping Lacazette could bring in goals from the front-line to help their club finish as high as possible next season. His arrival at the Emirates could put Theo Walcott’s place in the side in jeopardy but the quick winger was ecstatic at the thought of playing with his new team-mate. In a recent interview Walcott spoke out on Lacazette, who reminded him of Defoe, who will be playing for Bournemouth next season.
Walcott stated, “The French league is very physical league but he looks like he is in good nick. He reminds me a bit of Jermain Defoe in that he sees the target, shoots and scores.”
He referred to the Frenchman having a similar trait of being a ‘fox in the box’, as Defoe would be the quickest to react in the penalty area to capitalize.
The 28 year old Englishman added, “That is what I have seen of him in little clips, so hopefully he can bring those attributes to the team. There is loads of competition for places which is healthy as always, but we are looking strong.”
Walcott went on to talk about how pace cannot be the only attribute to rely on for breaching an opponent’s defense.
However, the former Southampton man was and still is one of the fastest players in the world as many defenders feared the young star, which granted him a move to Arsenal.
Walcott said, “Pace in the Premier League is the most important thing for me. It’s hard because a lot of teams drop back, sit back against us and it is tight because there is not a lot of space in behind. “You have to find different ways of breaking them down but that’s why you have got all these clever players like Mesut to get through them differently.”
He ended up mentioning, “Pace is always a threat. When you’re counter-attacking, it wins all the time. As long as we’ve got pace in this team, we’re going to be OK.”
Arsenal are set to play three games in two days as their pre-season tour begins facing Sydney FC on  Thursday followed by Western Sydney Wanderers on Saturday. Lacazette, Walcott and the whole Arsenal team are looking forward for a positive 2017-18 campaign.
My take-
Not sure if that is a compliment or an insult actually. Though, personally I have liked Defoe, he never made the right decisions in terms of his career and was never really a big team player (Second or not, we all know Spurs is ****)!!
Yet, the comparison has been made in a positive way and hopefully, our new signing can outshine and outclass Defoe in every way and become a legend at the Emirates in the years to come.
If I was in Walcott’s place, I would have rather compared him to Henry and urged him to be like the man himself.
Well, maybe, Lacazette sees things differently and takes it in a positive way. Like our page for more news.
Share
Facebook
Twitter
Pinterest
WhatsApp
Previous articleDeal Done: Chelsea And Manchester United’s Midfield Target Finally Signs Deal
Next articleWill This Real Madrid Star Sign For Jose Mourinho’s Manchester United Side This Summer?