Arsenal Beat Chelsea To Win The Community Shield, What Does This Mean For Both Clubs? 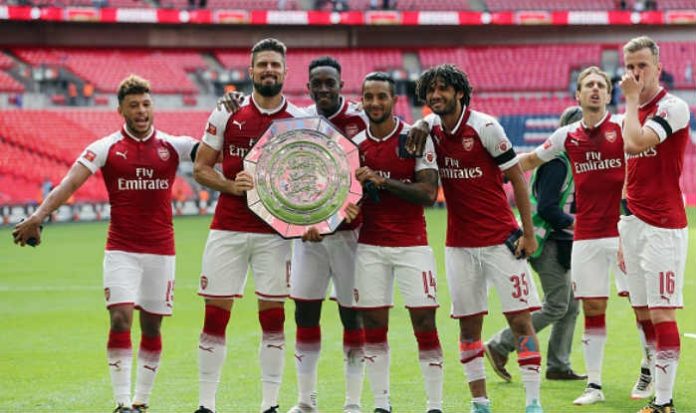 Arsene Wenger claimed his first trophy of the season after beating Antonio Conte’s side in the Community Shield on Sunday. The match ended 1-1 after normal time with Arsenal beating Chelsea 4-1 on penalties as Thibaut Courtois and Alvaro Morata missed their penalties at Wembley stadium.
The FA Cup winners managed to overcome the challenge of the Premier League winners as they came from behind to secure a dramatic last stand finish in the new ABBA penalty-shootout.
The first half saw Arsenal dominate possession and take control of the game with Danny Welbeck heading the ball straight into Chelsea keeper Thibaut Courtois’ arms after seven minutes of play from Granit Xhaka’s cross.
Arsenal record signing Alexandre Lacazette came closest to putting his side ahead after hitting the post from just inside the box after linking up with Welbeck in the 22nd minute. The French international was unlucky after curling the ball past Cahill and Courtois. Chelsea were slow to get out of the box and after half an hour Pedro tested Petr Cech with a left footed effort from a tight angle.
The Blues took the lead when Victor Moses, who was sent off in the FA Cup final in May, finished past former Chelsea keeper Petr Cech from six yards out after Gary Cahill headed the ball back into the danger area following a poor headed clearance by Granit Xhaka from a corner. Just 50 seconds into the second half and Chelsea were looking comfortable holding their shape in defense.
Again, Arsenal pushed forward and were looking for an equalizer and they almost found one when Xhaka stung a fierce, swinging shot from 35 yards out pulling out a stunning save by Belgian keeper Courtois in the 74th minute.
However, a decisive moment took place in the 78th minute when Pedro was shown a straight red by the referee for a challenge on Mohammad Elneny and the Gunners took full advantage of their 10 men opponents scoring from the dead-ball situation.
Xhaka curled a ball to the back-post where another new signing Saed Kolasinac headed across Courtois to put the Gunners on level terms much to the relief of their fans.
1-1 after 90 minutes and Gary Cahill stepped up first to put Chelsea one up on penalties. Theo Walcott then cancelled out Cahill’s strike and Naco Monreal gave Arsenal the lead as it was 2-1 to Wenger’s side.
Much to the surprise of Chelsea fans, Courtois was their second penalty taker and he blazed his kick over the bar. He was followed by new arrival Alvaro Morata as he too missed his penalty striking the outside of the bottom-left post.
Alex Oxlade Chamberlain and Olivier Giroud then converted their penalties to end the game 4-1, as the north London side won their third community shield in four years.
What Does This Mean For The Clubs?
Arsenal-
1. Wenger has firmly silenced his critics for some time now.
2. The team looks like a unit and some players who were rumoured to be leaving the Emirates, might not.
3. Arsenal gets huge boost in confidence and morale.
Chelsea-
1. Need some additional players, before the transfer window closes.
2. New signings need to settle in fast.
3. Conte needs Costa.
Hopefully you guys agree to these points. Do comment on the post or page for your views and keep tracking us for more stories. Cheers!!
Share
Facebook
Twitter
Pinterest
WhatsApp
Previous articleLiverpool Legend Feels Confident That The Reds Will Sign Defender, Despite Chelsea Interest
Next articleGist Of Jose Mourinho’s Presser, Prior to Manchester United’s Clash Against Real Madrid