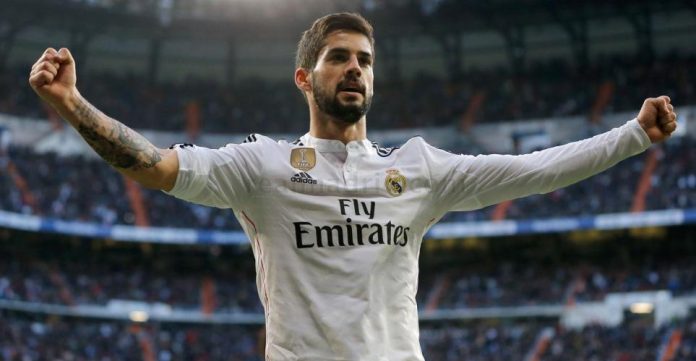 The Whole Transfer Saga With The Latest Update-

Arsenal, Chelsea and Manchester United were dealt a big blow when Real Madrid midfielder Isco signing a contract extension till 2022 with the Los Blancos. The Premier League duo was keen on bringing Isco to England next summer when his contract ran out at the Santiago Bernabeu, but with the new deal signed, the Spain midfielder will have a rather unpayable release clause.

One club’s gain is another club’s loss. And the champions of Europe were glad to announce that their talented midfielder has agreed to pen a deal which will keep him at the capital for 5 more years. But the top Premier League clubs were keen on securing the services of Isco, who has been quite phenomenal over the last two seasons for club and country.

The 25 year old attacker has been immense in the Madrid midfield helping them in winning the Champions League and La Liga last season. He was also a big part of the Madrid outfit that beat fierce rivals Barcelona in the Spanish Cup earlier last month.

Jose Mourinho was a keen admirer of the former Malaga play-maker and was looking to lure him to Old Trafford after a falling out between Inter Milan over Ivan Perisic. Along with excellent dribbling skills and technique, Isco is also a hard-worker for the team, who can adapt to playing anywhere in the attacking line.

Manchester United were desperate to sign a winger in the summer transfer window and may not be able to land Isco in the winter transfer window as well due to the rise in his market value. Isco’s contract was to run out in June of next year, but a new deal sees him earning a staggering €6m a year, with a reported release clause of €700 million.

Chelsea boss Antonio Conte also wanted to bring Isco to Stamford Bridge in an attempt to defend his Premier League title but the summer transfer window didn’t go according to the Italians plan. Although, Conte did manage to get one Madrid star in Alvaro Morata, but the Spanish forward wasn’t his first choice at a purchase.

However, it would now be near impossible for any club to come close to buying out Isco’s release clause price with €700m. It just goes to show how important the star man is for Real Madrid boss Zinedine Zidane. Even with the likes of Gareth Bale and Cristiano Ronaldo in the squad, Isco has fought hard to find himself in the starting eleven of the European Champions.

It has been claimed that Barcelona tried to sign Isco as well, prior to the Spaniard agreeing to a new deal with the champions of Spain and Europe. The Catalan outfit were looking some more stars up front, after the departure of Neymar to PSG and the 25 year old superstar has now revealed that there was surely an interest from the rival club for his services, in a recent interview.

Well, Isco has now broken many hearts of fans of these English giants. Is there something more going to happen? Like our page to know if something does happen in the future.

Share
Facebook
Twitter
Pinterest
WhatsApp
Previous articleWhat Went Wrong For Arsenal And Chelsea At The Bridge, As Their Rivals Cherished The Goalless Draw?
Next articleJose Mourinho Plays Yet Another Master Stroke, As Manchester United Shows Off More Title Ambition