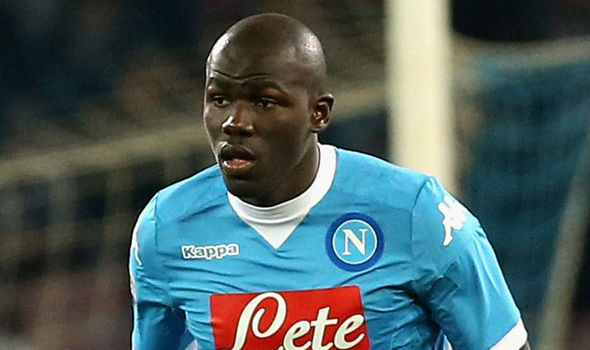 Could It Happen In January?

Antonio Conte’s Chelsea have been given a huge boost in regards of signing Napoli defender Kalidou Koulibaly, after learning that Barcelona will step down their chase from the Senegalese centre-back. Chelsea are now front-runners in bringing the highly rated defender to Stamford Bridge as they would be willing to pay the transfer fee for Koulibaly.

Barcelona were keen on bringing Koulibaly to the Nou Camp to strengthen their defensive line. The aging combination of Gerard Pique, Javier Mascherano and Jeremy Mathieu has contributed to the downfall of the Catalonian side over a couple of seasons. They have watched their fierce rivals Real Madrid win two Champions League titles and one La Liga title over the two seasons and were beaten heavily over the two legs of the Spanish Cup earlier at the start of this campaign.

Koulibaly has been a solid figure for Napoli and the Italian outfit values him very highly and the club’s president Aurelio De Laurentiis has constantly stated that he has battled to keep the defender out of the clutches of the Spanish giants.

It turns out that the Premier League champions Chelsea were also interested in signing the big centre back, Antonio Conte had reportedly made a £35m bid for Koulibaly which was rejected in the summer.

Chelsea have been a bit fragile in the defensive department since losing club legend John Terry to Aston Villa in the summer. Having recruited Antonio Rudiger from German club Stuttgart, the Blues still have a few holes in their back-line to cover up for.

Chelsea suffered a humiliating defeat to Burnley on the first Premier League game of the season which was followed by a good string of results but recent losses to top of the table club Manchester City and lowly Crystal Palace have dented their current campaign. They are unable to find last season’s cutting edge in their football and a title defense looks far from achievable.

The London team were at their best last term when it came to defending but have leaked in plenty of goals including a 3-3 draw against Italian side AS Roma last week. And although Chelsea beat Watford at Stamford Bridge this weekend, the home side still conceded two goals.

Koulibaly’s addition to Chelsea could be influential as he has impressed in the Serie A and Champions League as well. This could mean that Brazilian David Luiz could be deployed as a central defensive midfielder considering his passing and understanding of the game.

Chelsea are also boosted by Barcelona’s inability to pay the heavy fee that is requested by Napoli , which now gives them an edge over the Catalonians in the race for Koulibaly.

With the recent claims by the player’s agent suggesting that he did not leave the club this summer, as he wanted to win titles with them, it seems that the Blues will have to wait for some more time before they can get their target.

Unless and until, the Naples based side really hit a slump in the upcoming month, the player will look to remain with them and target silverware, including the Serie A title.