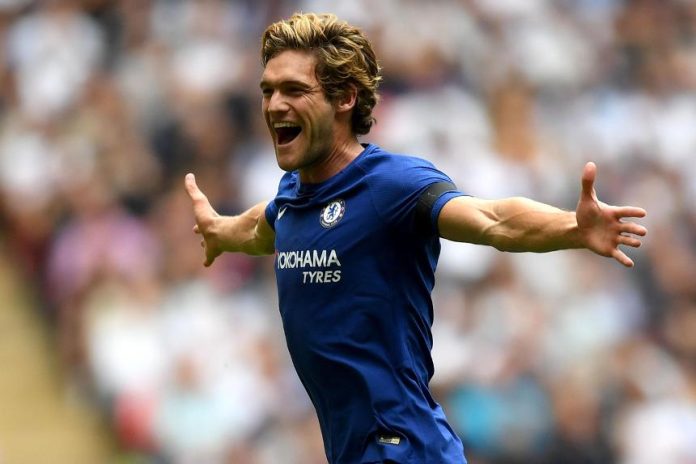 Chelsea’s left back Marcos Alonso is reportedly wanted by Spanish giants FC Barcelona to replace their long time left back Jordi Alba. Reports in Spain claim that Barcelona boss Ernesto Valverde is an admirer of the Chelsea left back and wants to bring him to Camp Nou. Marcos Alonso has improved his game a lot in recent time since his move to Stamford Bridge . The La Francia graduate who is a late bloomer has taken his game to another level in the last 18 months .

When Chelsea boss Antonio Conte splashed €25m on deadline day to sign Alonso from Fiorentina , many thought it would be another flop signing for the club . Many thought he would make a couple of substitute appearances and then would be shipped on loan to another club . These fears were reasonable because of his previous poor spells in Bolton and Sunderland . But that didn’t happen .

Alonso turned out be an important of Conte’s title winning team team last year. He continued that form into the current campaign as well , thus increasing Barca’s interest in him .  His top notch performances were appreciated and noticed as he was called to Spain national team for the first time in his career thereby completing a record of three generations of Alonsos playing for Spain national team. His father and grandfather also played for Spain.

Barcelona’s resolve to get a player hardly ever gets wavered. If they want one , they always get it. If Alonso is on their cards then it’s important that Chelsea look for replacements. Because that leaves them with only Emerson Palmeri as their only natural left back in the squad.

So here’s a list of three players that  the West London club may look to sign in the summer.

Antonio Conte brought this Ghanaian back in the year 2012 when he was in charge of Bianconeri.  Now 29 , Asamoah is an important player for the Italian side. With Juventus showing resolve to hold on to Alex Sandro, Chelsea are looking to sign Asamoah on a free transfer when his contract ends in the summer of 2019. Alex stayed in the summer and competed with Asamoah for the left back spot. With the Ghanaian not signing a contract extension , Conte may bring him in  the summer should he stay.

Barecca  is a young midfielder who has come from the youth ranks of Torino FC. Last season he made 28 appearances for the club. He created 15 chances, won 40 duels and completed 29 take-ons.

In the 2014-15 season, Gaya made 32 appearances for Valencia. He has been on the radar of every top flight club ever since. He has represented Spain at every level other than the senior level. And that is expected to change soon.

He has the profile of a perfect wing-back. He can defend, deliver balls into the penalty area and has good pace and stamina to cover the length of the  pitch. Aged just 22, he has still to reach his prime. Reports claim that he has a buyout clause of €50m .