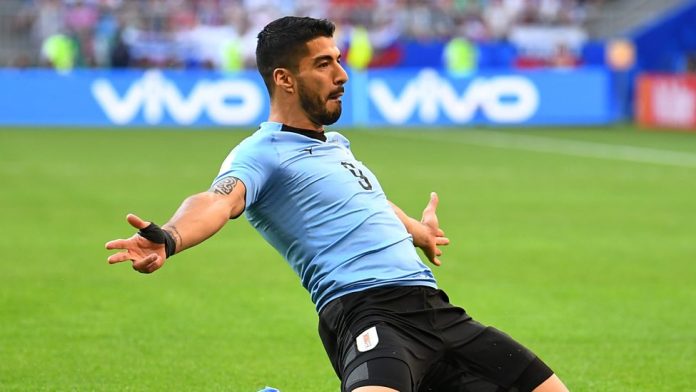 Uruguay will face Portugal in the round of 16 and that is gonna be one of the most interesting tactical encounters. Both sides follow similar formations, and approach to the game, remaining compact and defensively sound. Both depend heavily on their forward players too. Uruguay comfortably topped in Group A, seeing off Russia, Saudi Arabia, and Egypt. They are the only side who haven’t conceded a goal yet. There were questions though over their performances in the first two games, but Oscar Tabarez and his side improved significantly to beat Russia 3-0 in their final game. Meanwhile, Portugal went through a nervy qualification. Though most importantly, Cristiano Ronaldo is in impressive form scoring 4 goals already. Uruguay must formulate something to defend themselves from Portugal and Ronaldo, where the star players must show their true class. Here are four cards which much turn on to go past Portugal.
1. Fernando Muslera :
The only goalkeeper having all clean sheets. One of the participants to grab the Golden Gloves, of obviously Uruguay progress further in the competition. The Galatasaray keeper hasn’t yet conceded a single goal in the tournament. Though he faced no big troubles in the group stage with only 3 catches in his names. He played 69 passes, in which 53 were correct. Muslera would be a vital point where the success of Uruguay is holding on. Even De Gea got broken in front of Ronaldo, so he must stay strong. Very, very strong.
2. Diego Godin :
Another ace. Another card to shine high. Diego Godin is the last wall of Uruguay defence before Muslera. The Atletico Madrid defender showed sheer determination in the group stages, which may give a horizon of hope for the fans to think positive. Godin had 12 clearances, 7 interceptions and a single block. Godin will be another vital player to go well tomorrow as he must pocket in Ronaldo to nullify Portugal.
3. Jose Gimenez :
Along with Godin, this 23-year-old young guy showed how to defend your side. Conceded no goal and now the best performed defensive duo in the ongoing world cup. Gimenez played two matches in group stage and had 9 clearances and 11 interceptions. He had given a total of 158 passes with 54% success rate. Though most importantly he has a goal. He would be crucial in the corner pieces. Gimenez can convert some odd chances, Uruguay may surely clear Portugal.
4. Luis Suarez :
The man who must score. Suarez is the ultimate guy who should and must score for Uruguay. The Barca striker had a nervy start in the campaign but had 2 important goals in the group stages. Having 71.4% success rate in passing, Suarez must deliver for Uruguay tomorrow.
Apart from them, there are Edinson Cavani, Carlos Sanchez, Lucas Torreira and Rodrigo Bentancur who must come forward to save the day for their country. For Portugal, Cristiano Ronaldo would be the X-factor. If Uruguay can hold back Portugal forward line, the match would be already won by them.
If these players can do their job perfectly, Portugal will be in real trouble against Uruguay in the round of 16 clash.
Share
Facebook
Twitter
Pinterest
WhatsApp
Previous articleThree Major Problems That Portugal Will Face In Their Match Against Uruguay
Next articleLatest Transfer Update On Star Associated With West Brom, Wanted By Celtic And West Ham