Gonzalo Higuain has officially completed his move from AC Milan to Chelsea, as various media outlets have confirmed.The 31-year old Argentine striker was on the Blues’ wish-list for some time now with Maurizio Sarri finally reuniting with his man in the January transfer window.London giants have landed Higuain on-loan until the end of the season where upon he shall return to his parent club Juventus after the 30th of June.

However Chelsea might be able to keep hold of the striker for a further period. Juventus have released a statement  that revealed their agreement with AC Milan has been terminated and that a new one has been set up with Chelsea.

According to the Old Lady, Chelsea have the option to extend his stay until 30th of June 2020 if they pay €18m in the 2019/2020 financial year, should the Blues not take up that option then they could make the deal permanent for €36m and payment would be made in two financial years. The official statement on the website confirmed the same.

Chelsea confirmed that Higuain would be wearing the number nine shirt during his time at the club.The director of football at Chelsea, Marina Granovskaia told reporters, “Gonzalo was our number one target in this transfer window and arrives with a proven record at the highest level. He has previously worked with Maurizio to great effect and is familiar with how the coach likes to play. This was not an easy deal for us to do because of the numerous parties involved, but we are delighted we were able to make it happen and we look forward to seeing the impact Gonzalo will make for us in the second half of the season.”

Hopefully, the player can make the impact that he is expected to make in the upcoming days, with the club needing a prolific goal-scorer. They have been struggling with the likes of Morata and Giroud in front of goal and Higuain can claim the first-team spot if he can start scoring some goals on a regular basis.

The main advantage for the former Real Madrid man will be that he has played the Sarri-ball game under the Italian manager, during their days together at Naples. He will be more comfortable to fit into the system that has already been set-up by Sarri. 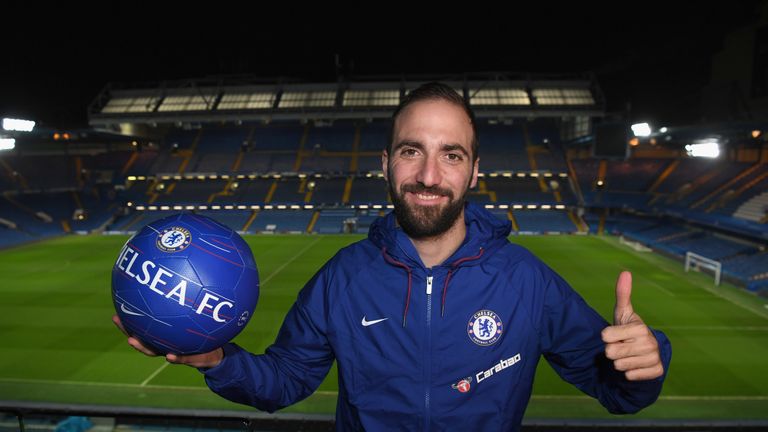 Gonzalo Higuain’s Reaction-
“When the opportunity to join Chelsea presented itself, I had to take it.”
“It is a team I have always liked that has a lot of history,a wonderful stadium and they play in the Premier League, a league I have always wanted to play in.I now hope I can give back that trust Chelsea shown me out on the pitch.I can’t wait to start and I hope to adapt as soon as possible.”
The former Real Madrid and Napoli ace will be reunited with manager Sarri who under his guidance  scored 38 goals in 42 appearances at Napoli.
Will he be the answer for Chelsea’s striker problem, which has already hurt their title ambitions this season? Will he help Chelsea secure champions League spot?  We will have to wait and watch, though a lot of Pundits have backed him so far to succeed, where his predecessors failed to make an impact.

The Troll-
Messi fans have in particular started trolling the Argentine duo after this picture was recently posted. The captions talked about how they were responsible for Argentina’s failure to capture a World Cup, with Higuain missing sitters in the 2014 tournament, while Caballero being really poor last year. Well, the jokes have started coming in and with the Blues reaching the finals of the League Cup last night, hopefully the titles start coming in too.
Former Blues’ star Andriy Shevchenko also took a dig at the player for his move to Stamford Bridge, saying that Milan don’t really need him and he has chosen the tougher option for himself. Well, hopefully the 2014 World Cup finalist can now perform and silence his critics.
Sarri has done a good job with the team so far and the addition of Higuain to the squad is another major boost in itself. With some crucial games coming up, the fans will be delighted that the club could pull off this move and fill the void up front.
(Author- Aditya Sreevatsa)
Share
Facebook
Twitter
Pinterest
WhatsApp
Previous articlePaul Pogba Reveals The Reason For Solksjaer’s Success At Manchester United
Next articleMatch Preview : Arsenal vs Manchester United, These Top Stars Will Miss This Big Match