Chelsea Boss Maurizio Sarri Makes This Strange Comment, How Will The Fans React?

The Blues manager Maurizio Sarri has stated that it will be extremely difficult for Chelsea to get a top-four spot after suffering a defeat against Everton this weekend in the Premier League. Chelsea could have taken advantage of Manchester United’s loss at Arsenal and moved into 5th place with a win or draw but that wasn’t the case.

When Maurizio Sarri initially took charge of Chelsea football club back in the summer of 2018, he replaced fellow Italian manager Antonio Conte at the helm and he has done quite an impressive job. The ex-Napoli master tactician received plenty of plaudits and praise for bringing in an effective and attractive brand of football into the Premier League. The 60-year-old manager took Chelsea to the finals of the League Cup but unfortunately lost out to Pep Guardiola’s Manchester City on a penalty shootout.

Sarri has also guided Chelsea into the quarter-finals of the Europa League this season and they have a great chance of winning the tournament. However, Chelsea slipped up and suffered a poor run in the Premier League which made them drop to sixth place and they are now in the hunt for a Champions League berth.

The most recent setback came against Merseyside club Everton last weekend when the West London club suffered a 2-0 defeat against Marcos Silva’s side at Goodison Park. Chelsea looked the more dominant threat in the first half and they could have gone on to score three or four goals in the opening period but then Everton came out stronger in the second half to claim all three points. The Blues missed a great opportunity to close in the gap on a top 4 spot and Sarri has vented out his frustrations.

While speaking to reporters, the Italian boss was critical of his side for not taking the chances that they created and also admitted that this was the limit, “At the moment this is our limit, I think. In my opinion, the first 45 minutes were the best we have played all season, then in the second half we stopped playing. We forgot how to defend, forgot how to counterattack and that is a problem for us, because even if you don’t score you have to stay in the match.” 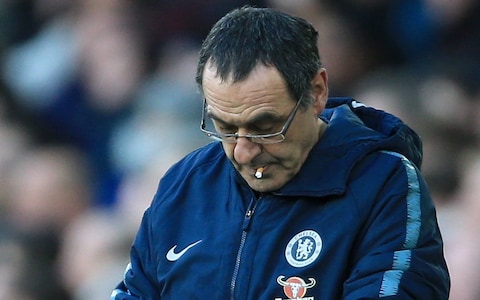 With eight games remaining, Sarri also explained his club’s chances of finishing in the top 4, “If you are asking me about the top four I would say it depends on whether you are speaking about the first half or the second. It will be hard to reach the top four now but I would not say impossible. If we can play as we did in the first half for eight matches we will give ourselves a chance.”

Well, the 2-0 loss to Everton has surely not helped the cause of the west London side and now if they wish to get something out of this season, they need to really play well and keep winning. Their inconsistency has hurt them quite a bit right through the campaign, though they did manage to reach the final of the League Cup, only to lose to Manchester City on penalties.

They will want to go all the way in the Europa League and finish in the to four of the Premier League. Hopefully, Sarri can pull it off.