According to the latest reports, Premier League champions are preparing a massive bid to beat Manchester United in the race to sign Inter Milan defender Milan Skriniar in the upcoming summer transfer window.  The Red Devils are keen on signing the big Slovakian but it seems like Pep Guardiola’s side will raid a deal on the central defender.

Pep Guardiola’s Manchester City stormed their way to the Premier League title last season breaking plenty of records in the process as well. Manchester City reached 100 points in the process and are currently the favorites to defend their title. The Blue half of Manchester are currently sitting in 2nd place on the League table but are just two points behind leaders Liverpool with a game in hand. With eight games to go, Manchester City should win the title if they earn three points in every game they play. However, Guardiola is still keen on improving his already high-quality squad by bringing in re-enforcements in the summer transfer window. One area of importance that City are second to at the moment is the defense as only Liverpool have a better record in comparison to their title rivals. 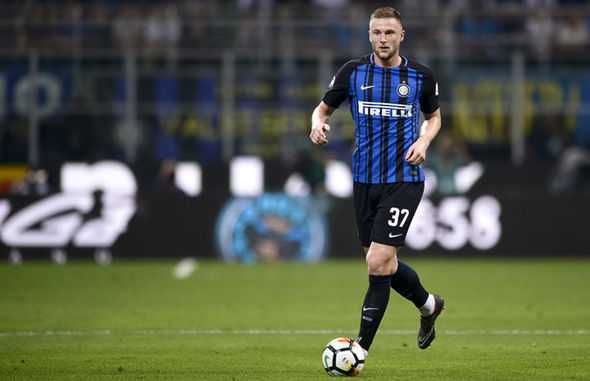 Since Ole Gunnar Solskjaer took charge of Manchester United back in December, he has exceeded expectations. The Norwegian has won his first 14 out of 19 games that he has managed so far for United and brought a sense of positivity and fresh air into Old Trafford. Solskjaer helped United qualify to the Champions League quarter-finals after a dramatic win over Ligue 1 giants Paris Saint Germain earlier this month. United completed a stunning comeback against the French champions after trailing 2-0 from the first leg to win 3-1 in the second.

The Red Devils are currently sitting in fifth place on the Premier League table and are in contention to finish inside the top 4 to qualify for a place in the Champions League.  Solskjaer has put himself as the top candidate to fill in the job as United manager on a permanent basis but the 46-year-old is still aware that he needs re-enforcements if he is to build a team that can challenge for silverware in the near future.

Manchester United desperately needed a centre-back last summer but failed to land one, however, the English giants now want to lure in Milan Skriniar who has impressed during his time at Inter Milan. The 24-year-old has been impeccable for the Serie A giants and has helped them to 3rd place on the Italian League table.

Now the two Manchester clubs are reportedly targeting Skriniar to bolster their respective squads. Initially, United was prepared to sign Skriniar this summer but Manchester City is going to make a world record offer to sign the talented centre-back.

Manchester City captain Vincent Kompany is 32 years old now and he is yet to sign a contract extension, while Nicolas Otamendi, 31 years old is also struggling to find regular football off late. Skriniar will be another top-notch option for Manchester City if he arrives at the City of Manchester this summer transfer window.