Manchester United Given Hope To Sign Jadon Sancho, But Chelsea Star Could Play A Part

According to the latest reports coming out of the Sun, Premier League giants Manchester United have received a major boost in the race to sign Borussia Dortmund superstar Jadon Sancho  in the summer transfer window. However, a deal could possibly go through if the Bundesliga outfit snaps up Chelsea star attacker Callum Hudson-Odoi.

The Red Devils have gone through quite a torrid time at the start of the campaign when Jose Mourinho was in charge of the club. The Portuguese manager instilled a very defensive style of football into the club which was not something that the United faithful were used to seeing on a regular basis. The football was quite dire and lacking conviction and the writing was on the wall for the 56-year-old to leave the Manchester based side eventually.

A 3-1 humiliation at the hands of fierce rivals Liverpool back in December was the final nail in the coffin for Mourinho and he was dismissed as manager of the club just a few days later. There was a serious need to change at this point and change is what they got. 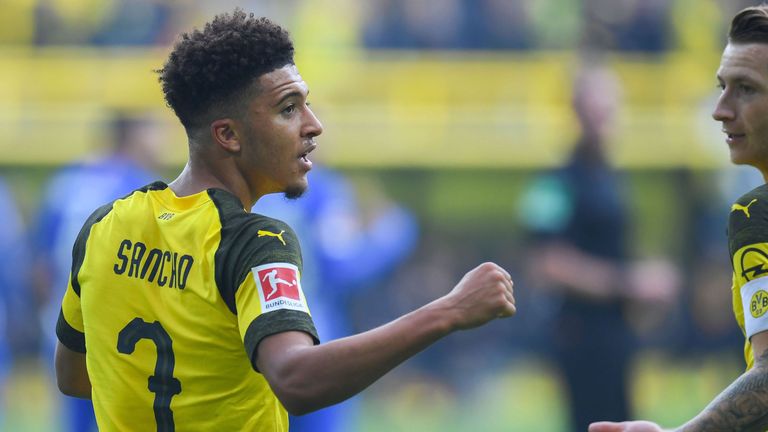 However, United then turned to a familiar face in the form of Ole Gunnar Solskjaer to add stability to the club at least until the end of the season. However, the 46-year-old has exceeded expectations and has put himself in the running to take up the job on a permanent basis. United completed a dramatic comeback against Paris Saint Germain in the Champions League recently after overcoming a 2-0 deficit to win 3-1 at the Parc Des Princes in order to qualify for the next round.

Now, Solskjaer has to focus on next season and he needs to bring in reinforcements to strengthen his squad. The former Manchester United striker has stressed that he wants to bolster his attack for next term and has a few targets in the transfer window on his radar. One of them is English superstar Jadon Sancho who has been absolutely brilliant for Borussia Dortmund this season.

The 18-year-old Sancho has been labeled as one of the hottest properties at the moment after he has netted nine goals and notched up 13 assists this term. There are a host of clubs keen on signing Sancho and Manchester United are one of them as the Red Devils are preparing a £100m deal to lure the teenager to Old Trafford in the summer.

Although Borussia Dortmund has insisted that Sancho isn’t for sale anytime soon, a big money offer could change their mind. More so, the German table toppers are looking to replace Sancho with Chelsea’s young sensation Callum Hudson Odoi in the summer. Hudson Odoi has been linked with a move away from Stamford Bridge in the summer as Bayern Munich are keen on signing the 18-year-old talent.

However, with the possibility of Sancho leaving, even Dortmund are monitoring Hudson Odoi at the moment and could bring him to the Westfalenstadion soon. Hudson Odoi is lacking game time at Chelsea at the moment but his limited displays have caught the eye of a few top clubs.

Share
Facebook
Twitter
Pinterest
WhatsApp
Previous articleSerie A Superstar Could Be On His Way To Arsenal; Though Tottenham, Manchester United And West Ham Want Him Too
Next articleCan This Star Actually Replace Cristiano Ronaldo At Real Madrid?