Arsenal May Have Found A Solution To This Problem, Fans Would Be Delighted?

The Europa League final this time will be a huge showdown. London-based Arsenal and Chelsea are all set for a derby in Baku, Azerbaijan on 29th May. However there was a problem for the Gunners as Armenian international Henrikh Mkhitaryan could possibly miss out on the tie due to safety concerns.The region has high political tensions between Azerbaijan and Armenia over the disputed Nagorno-Karabakh area. Apparently there are no diplomatic relations between the two countries in question. The Armenia captain has previously remained at home for both Borussia Dortmund and Arsenal when his teams have travelled to the nation.

However, there’s a huge difference this time as the European Finals are at stake and as Arsenal have finished outside of the top 4 in the Premier League, the Europa League result has huge importance for the next season. If Arsenal win the Europa League in Baku, they will qualify for the Champions League next season which would give them more funds to operate in the transfer market this summer as the Gunners look to continue their squad reshuffling in order to make themselves more competitive domestically and in Europe. The club management wants Mkhitaryan to travel to Baku as the Armenian international is a huge asset to the club and they are awaiting acceptable guarantees from UEFA. Unai Emery was pretty vocal about him wanting to take the attacker to Azerbaijan for this month’s final. 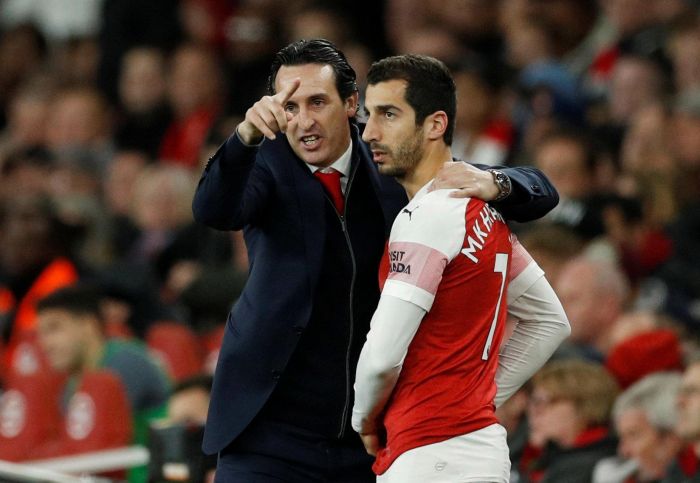 Speaking on the matter, Umery said: “It is a political issue but I don’t know well what the solution is. We want to play with Mkhitaryan. Today he worked very well and we are ready to do all we can to play with him. I don’t know the possibility with the political issue. Really, I don’t know what the problem is between the two countries but we are going to do all we can to have Mkhitaryan there. This is not sporting. It is not in my hands. I don’t understand what the solution is.”

“The safety and security of all of our players is of paramount importance,” an Arsenal spokesperson said. We are seeking guarantees from UEFA that it will be safe for Henrikh Mkhitaryan to travel to Baku for the Europa League final, which both Arsenal and Mikhi require for him to be included within our squad. Acceptable guarantees have not been received yet, and we hope that UEFA will be able to supply these promptly. We are of course hugely concerned that the location of the final could lead to Mikhi not being able to play in a European final.”

Strong statement from Arsenal regarding the Europa League Final: pic.twitter.com/tO2gk4n1Ba

Uefa’s standard procedure is to send letters of support to associations, clubs, and embassies to facilitate visas for foreign travel if needed. Unai Emery is a veteran in this tier of European competition, having won the trophy with Sevilla 3 years on a row since 2013-2015. Maurizio Sarri, who on the other hand is yet to win a winners’ trophy with a team in his career, will be looking forward to making his mark as Chelsea manager in Baku later this month.

It has been confirmed that though Mkhitaryan has been cleared by UEFA and the Azerbaijan FA to play in this match. However, the north London giants were being cautious about the whole situation and were asking the player his opinion on the whole matter.

There is a possibility that he may not travel to Baku for his own safety and it will be interesting to see how things plan out further. It is an issue that may not have a realistic solution, but everyone is trying for the best outcome possible.