Liverpool club captain Jordan Henderson has revealed that Alisson Becker’s save against Napoli in the dying few minutes was the most crucial part of the Champions League campaign this season. The Merseyside club would have been eliminated from the group stages itself if the Brazilian shot-stopper hadn’t made one of the most season-defining saves that night at Anfield.

Jurgen Klopp has guided Liverpool to Champions League glory following their win against Tottenham Hotspur in the final. Although the Reds managed to win 2-0 at Madrid against the north London side, they were immense in the Premier League as well. The German boss challenged Manchester City boss Pep Guardiola to the final day of the season as the Spaniard came out on top. Manchester City stormed their way into the Premiership last season when their team broke multiple records along the way and amassed a staggering 100 points in the process. However, this season, City had a fierce competitor in Liverpool as they finished the campaign just one solitary point behind Manchester City, who still won the league with 98 points. 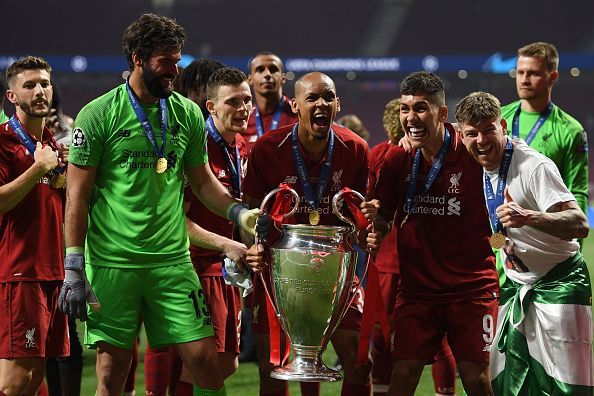 Manchester City managed to win the domestic treble of the FA Cup, League Cup, and Premier League and became the first English side in history to achieve the feat. But Liverpool managed to bring back the Champions League trophy and deny Pep Guardiola a quadruple. It wasn’t an easy ride to continental glory for Liverpool as they had to overcome a tricky group of Napoli and Paris Saint-Germain as counterparts. The Reds got off to a rather poor start away from home in the Champions League as they suffered three defeats on the road and their qualification came down to the wire as they needed a win against the Serie A giants, Napoli, to ensure progress through to the Round of 16.

Egyptian star Mohamed Salah rose to the occasion and gave the hosts a lead with a superb individual goal as Anfield erupted. The Italian visitors were going to have one chance which came their way and it did late on in the game. The ball dropped to Pole forward Arkadiusz Milik only to be denied by a point-blank save from Liverpool shot-stopper Alisson Becker in the last few seconds of the game to keep Liverpool in the competition.

Goodnight to all my friends and Liverpool family. #LFCFamily pic.twitter.com/nFaKB5DfoZ

At that point in time, 26-year-old goalkeeper Alisson Becker looked like he was worth way more than the £60m that Liverpool shelled out on him in the summer transfer window.

Following the Champions League victory, Liverpool captain Jordan Henderson has admitted that it was the turning moment of the campaign, “So much has happened since we played Madrid, not least the World Cup. I was asked before we played PSG, our opening group game, whether it felt like we had unfinished business in Europe, but you do not think like that. What I remember most was the save from Alisson in injury time on Milik. I still do not know how he made it. That moment shows why the manager wanted to sign him. Honestly, I can not speak highly enough of him. He is an unbelievable keeper. You can’t stress enough the importance of that save.”