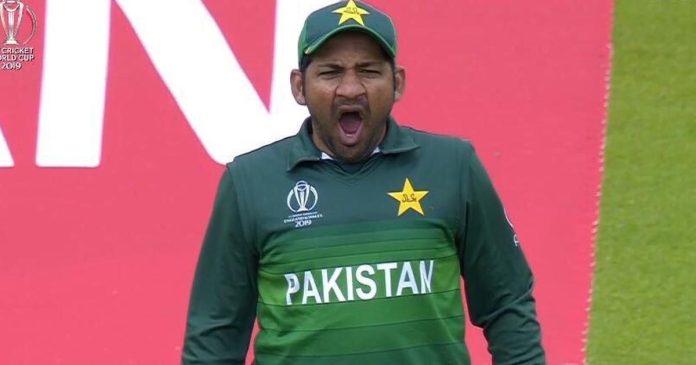 The Steve Smith Story- Khushbakt Sarfaraz has come to his husband, Sarfaraz Ahmed’s defence after he became a victim of trollers and members because of yawning during Pakistan’s game against India in the 2019 World Cup. She took out an image of Steve Smith doing something the same but sitting on the bench rather than on-field during Australia’s T20I game against England.

She posted with the caption ‘Legends be like’ with a high five, crazy and dancing emoji mocking the fans who made memes on her husband. The tweet resurfaced the internet and became viral.

Story About The Troll

The unfortunate Sarfaraz had a torrid period in the 2019 World Cup in England. Not only did he yawn behind the wickets before the Indian innings began but also faced criticism. That was due to his unimpressive captaincy led the team down in the group stage. This thing went so far that he was stripped off from his captaincy. He was even dropped out of the starting eleven. From then, the wicket-keeper batsman is continuously subjected to harsh memes and hate on social media.

Sarfaraz didn’t return to the squad for nearly a year after that. However, he only names himself on the bench for the three test matches and two T20 international during their tour with the tournament host, England. The funny thing is he once again was caught yawning sitting on the bench. He also created a fun fact side by side by becoming a player to yawn on three known formats of the sport.

What Was Said About Steve Smith?

He also made a real mess in on-field action in attempting to stump out Moreen Ali. This was after he featured in one of those games in starting eleven of the green jersey. The 33-year-old missed an easy stumping of the English all-rounder who went to hit an outstanding 61 runs out of just 31 balls. Although Pakistan rescued the game-winning by only five runs, Sarfaraz failed to dodge criticism.

Sarfaraz did come out with a reply to only the jibes he is undertaking for his activities and on a cryptic tweet he received on the 2nd of September by quoting, ‘Main itna bhi bura nahi hu, jitna log bata raha hai [I am not that bad the way people portray me]’. Now, his wife has added to his voice by bringing the tweet mocking Steve Smith.

The Story Further On-

On contrast, Smith is Australia’s mister dependable. His outstanding shows on the pitch makes him one of the top-level batsman of his generation. The 31-year-old batting and captaincy at times are totally pleasing to the eye. His consistency in every format of the game is just unreal.

He was pictured yawning like Sarfarz during his team’s tour with England on September 4. It is safe to say that Smith won’t get the bashing the Pakistani cricketer receives purely because of his dedication to playing the sport. The amount of hard work he puts can bring about a yawn sitting on the bench. That is rather than making a fool of oneself of not putting into any effort and doing the same. Most importantly on the field and being a captain.