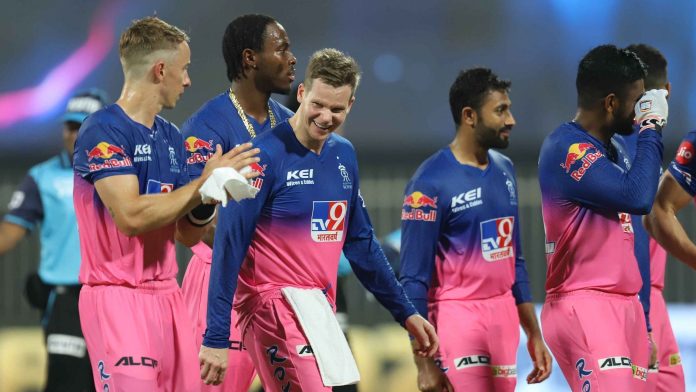 The Rajasthan Royals-CSK Story- The 14th edition of the Indian Premier League is knocking at our doors. With the speculations about the addition of two new teams now being confirmed by BCCI itself, the stakes are as high they ever get. However, that inclusion has been delayed to 2022.

This year, the mini auctions will be repeated and it is set to take place on 11th February. Ahead of the auction, the teams have started building their squads for the upcoming season. Meanwhile, the trash talks have started as well.

The Troll By Rajasthan Royals That Went Viral

We all are well aware of the Rajasthan Royals twitter admin. He is well known for his savage memes and posts. The admin often replies to all the fans and is widely and anonymously appreciated by all the fans. After being inactive for quite some time due to the gap between the two seasons, the Rajasthan Royals Twitter page is active once again. And the admin has returned with a bang.

Let’s finish the boredom by trading Smudge to CSK ?

On Tuesday, the official account of the Rajasthan Royals put out a Tweet saying, “We are a bit bored. Anyone there?” To the same, a CSK fan replied saying, “Let us finish the boredom by trading Smudge to CSK (sic).” Calling for RR to trade their captain Steve Smith to rivals CSK.

The admin of RR’s Twitter handles used this opportunity to take a jibe at CSK and their reputation for buying and selecting players who are in the late 30s by saying, “Let us wait on this, he is still in his early 30s.” This interaction and hilarious dig at CSK by RR has now gone viral.

In reality, the CSK management indeed is having a tough time finding new players. After a horrific performance in IPL 13, the fans have called for a total rebuild. The 30+ average age of the CSK teams is the biggest concern. It is now being reported that veteran CSK batsman Kedar Jadhav will no longer be a part of CSK’s squad in 2021. Kedar gave a very bad performance last year and this removal is an aftereffect.

However, skipper Mahendra Singh Dhoni will remain the captain of the team. Both the fans and the management did not want to let go of their beloved ‘Thala’. A few days ago, CSK’s management also announced that Suresh Raina will also be a part of the team in 2021. The former Indian player did not feature in last year’s IPL due to some personal reasons. CSK had also broken all its ties with the player. And it was being rumoured that Raina will be the captain of one of the ‘newly formed teams’. With the postponement of the inclusion of these new teams, Raina will stay in CSK for now.

The auction is more important for CSK than any other team as they are looking for some fresh recruits. The Ongoing Big Bash League will be a good opportunity for all the teams to do their scouting and find young talents. Jofra Archer was also a find of this famous Australian T20 league.