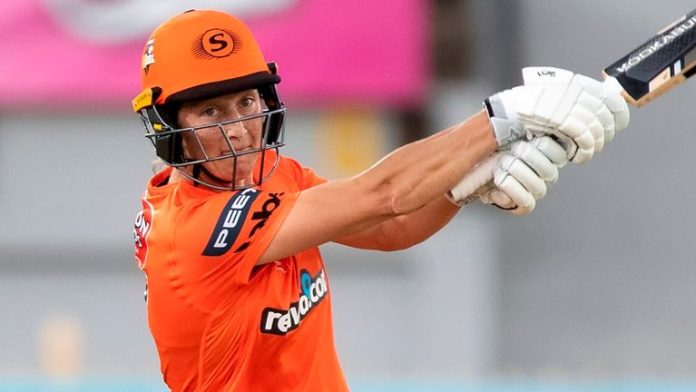 New Zealand women cricketer and captain of the national cricket team Sophie Devine scored a brilliant century off just 36 balls for his Wellington Blaze side in the Super Smash T20 challenge tournament. Sophie hit a massive six over mid-wicket to reach his century of the 36th ball of his innings.

Unfortunately, that ball hit a young girl who was a spectator with his mom. Sophie did not celebrate her ton and paid attention to that girl in the stadium. She hit another two boundaries to finish the game in style and ended up scoring 108 not out of 38 deliveries.

Sophie walked down the boundary rope right after the game finished, to watch that little girl who was in pain. It was pure class from the Kiwi skipper and another example of why cricket is called the gentleman’s game.

Otago Sparks made only 128 for the loss of seven wickets after winning the toss. Wellington took only 8.4 overs to chase it down courtesy of Sophie’s fastest T20 hundred in Women’s cricket history. Devine’s knock was also the fastest T20 century in New Zealand. Beating Tim Seifert’s 40-ball effort for Northern Districts in Mount Maunganui in 2017. It’s also the third-fastest Twenty20 century by any New Zealander, behind Martin Guptill’s 35-ball ton for Worcestershire against Northamptonshire in 2018 and Scott Styris’s 37-ball century in 2012 for Sussex against Gloucestershire.

Blaze’s dominant 10-wicket victory saw them go top of the standings of the Super Smash competition.

The 31-years-old Kiwi skipper was in a 14-days isolation period. Before this game and says in the post-match press conference that she was nervous. Sophie Devine also says it was really good for her to get some time out there in the pitch.

“I was really nervous this morning. Whenever you have a bit of an extended break away from the game, you get nervous about [whether] you can come back into it. So it was just [nice] to spend some time in the middle and get a few out of the screws.

“For me it was just about playing smart cricket – to know where my gaps were, trying to manipulate the field … I felt I knew where they were trying to bowl so if I could manipulate myself around the crease, I could open up areas of the field, so, yeah, I’m pleased with the way it went today.

“Sometimes I can get a little bit carried away … and I get a bit over eager and play some rash shots so it was nice to stick to some decent cricket shots today and finish the job.”

However, the current reports suggest that the little girl is currently fine after that ball hit her. She escaped with a minor injury. All is surely well that ends well at the end of it all.

Wellington and Canterbury are topping the charts with 20 points of six games so far. Canterbury is only behind Wellington on net run rate. Central Districts sit on third with 16 points.