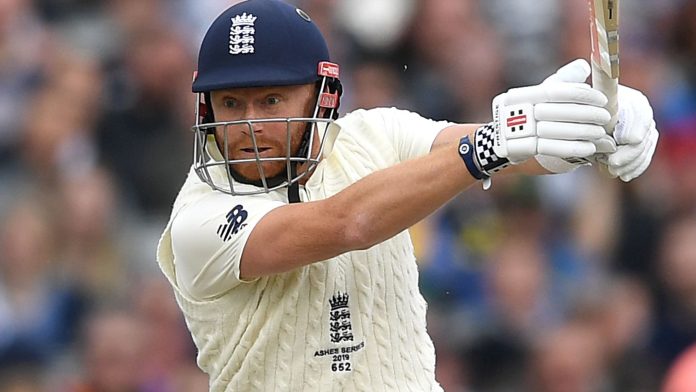 We have witnessed every strange incident in cricket now. Yet, with each and every match, the game of cricket does not fail to surprise us. A crazy incident that occurred in today’s test match between England and Sri Lanka has made every cricket fan laugh and a video clip of the same has gone viral on every platform of social media.

The English team will soon visit India to face the hosts in a 4-match test series. Before that big series, they are currently playing another test series against the Sri Lankan. It was during this match the ‘never seen before’ incident occurred. In the ninth over of England’s innings, Bairstow hit a six and it went straight into a bucket consisting of white paint. Suddenly the red ball changed to a white ball and the umpires going to take a new ball.

The incident surprised not only the fans and the audience who came to see the match live but also the on-field players. A Sri-Lankan player has been caught expressing his amazement, courtesy of the stump mic. The others couldn’t stop laughing and Jonny Bairstow was himself shocked.

What’s next for Bairstow and Co.?

England’s upcoming test match against India will be their real challenge. Some players like Ben Stokes have already flown to India and a specific part of the English national team has started their preparation for the series as well. The others will join in once they are finished with this test match against Sri Lanka. Allrounder Ben Stokes shared a picture of himself on the plane to India on Twitter. He wrote in the caption that he’s ready for the match. There was quite a controversial incident regarding that post as well when the Indian fans started trolling the all-rounder in the comments.

To everyone’s surprise England’s responsible batsman Jonny Bairstow has been rested for the test match against India. Given the grandeur of this series, the decision of not including Bairstow in the squad has been questioned by many experts. English captain Joe Root is in top form. He missed his double century against Sri Lanka by less than 20 runs and he will look to improve his performance against the blues. Root will cause a lot of trouble to the Indian bowling unit and will look to continue his good form.

On the other hand, the Indian players will get comparatively more time to prepare for the upcoming test series as they returned from Australia two days ago. The players are now enjoying their short vacation after which a rigorous training process will restart. India has kept more or less the same squad that won them the series against Australia. The only change is that Thangarasu Natarajan has been rested.