Watch: Alexandra Hartley Trolls Fan Who Feels No One Cares About Women’s Cricket 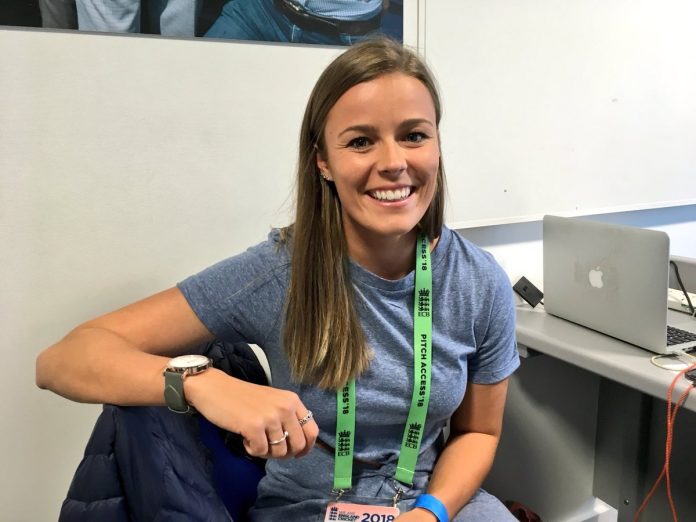 The Alexandra Hartley Comment That Lit Up Social Media- A fan took on to Twitter to ask a question, that caused a debate with English player Alex Hartley giving a fitting response as she posted a few pictures. Women’s cricket took a major hit due to COVID-19 with the World Cup being postponed, the Women’s T20 challenge and Big Bash League being held at a low scale.

The last time the
English women’s team took on to the field was when they hosted the West Indies women’s team in September last year. They won the series.

England cricket’s Twitter handle featured a challenge for the followers. The tweet said, “It has been a while since our Women were in ODI action! Can you name the missing players from the XI? 1. Beaumont 2. Wyatt 3. Sciver 4. Knight 5. 6. 7. Brunt 8. 9. 10. Shrubsole 11. Davies.”

It’s been a while since our Women were in ODI action!

Can you name the missing players from the XI? ?

The Response From A Fan That Got A Lot Of Hate

However, one troll didn’t take this sporting effort by the board well. Without really thinking he went on to make a very loose comment. He wrote in response, “Does anyone care about women’s cricket?”

This was not something that would go down well with people on Twitter and Social Media in general. These days everything is rather offensive to some, though this actually had a bad taste. It did get the response that it deserved, especially from Alexandra Hartley, who was rather vocal about her opinion and let the fan know exactly what she left.

While this Tweet sparked a debate, young English star Alex Hartley responded with a series of pictures. These were enough to end any sort of debate or discussion that would take place on the topic. What a way to prove a point to an ignorant cricket fan!!

She included pictures of the 2017 World Cup final between India and England, in the picture, showed a record 86,174 attendance.

The record attendance was recorded during the final of the 2020 Women’s T20 World Cup final between the hosts Australia and Harmanpreet Kaur’s India at the Melbourne Cricket Ground.

The match was won by Australia single-handedly with opener Alyssa Healy leading the way. The tournament saw a surge in viewership for Women’s cricket. It also became the most attended women’s cricket match in the history of the sport. Even the 2017 World Cup saw people follow cricket – stars like Harmanpreet Kaur and Atapattu taking centre stage.

Alex Hartley made her international debut in 2016 and she has played 28 ODIs and four T20Is so far. Picking 39 wickets in the one day format and three in the shortest one, Hartley has been one of the stars one might want to keep an eye on.