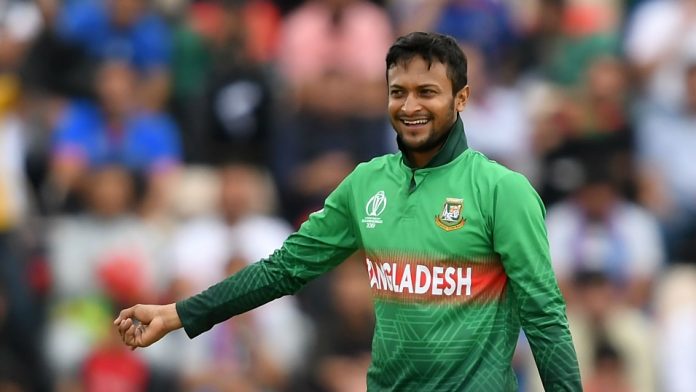 Shakib Al Hasan, one of the best all-rounders in the world was banned from cricket last year. He had failed to report being contacted by a bookie, which is against the ICC’s code of conduct. With that being said, the player missed out on cricket for a year. He missed out the IPL last year as well, though he luckily did not miss too much cricket due to the pandemic.

Shakib Al Hasan was lucky that he did not miss the T20 World Cup, that was rescheduled to 2021. The player has now completed his ban and made a return to cricket. He was part of the Bangladeshi team that is playing the West Indies at present.

Shakib Al Hasan made his return to the Bangladesh team in the first ODI against the West Indies. The all-rounder ended up picking four wickets on this return. Below is the video of his bowling performance.

In the 7.2 overs that Shakib Al Hasan bowled, he took four wickets for eight runs. He also managed to make 19 runs for his team. For his overall performance, he was awarded the Man Of The Match.

What Next For The Player With Regards To The IPL?

There have been a lot of players that have been released by the teams in the IPL recently. That is before the mega auction of IPL 2021. However, Shakib Al Hasan has always been a great asset to any team that he has been part of. Due to that, he will be a wanted player.

Let’s wait and watch which team acquires his services now. It will be a tough call to make but the player is a valuable asset for sure.

What Next For Bangladesh And Shakib Al Hasan In This Series?

Bangladesh comfortably destroyed the West Indies in the first ODI of the series. They have looked really good while their opponents have struggled. There are still a couple of games left in this series and the Asian side will want to dominate.

West Indies will really have to fight hard if they want to impress. They have quite an inexperienced side and are struggling at present. The loss in the first ODI was a clear example of what is wrong with their team at the moment. They will really need to change things around if they want to get things done and actually win something. It will still not be an easy task.

The Players Will Want To Impress Ahead Of IPL 2021

The IPL 2021 auction is about to happen soon. The players will want to impress and could be selected at a good price. That is if they are able to impress. Shakib Al Hasan has already left his mark once again.

Despite the gap in cricket, it seems that Shakib Al Hasan hasn’t lost a step. The other players too will want to impress and get bought by the big teams in the IPL. Other players this time have a better chance too if the rules are revised. Let’s wait and watch how things turn out.