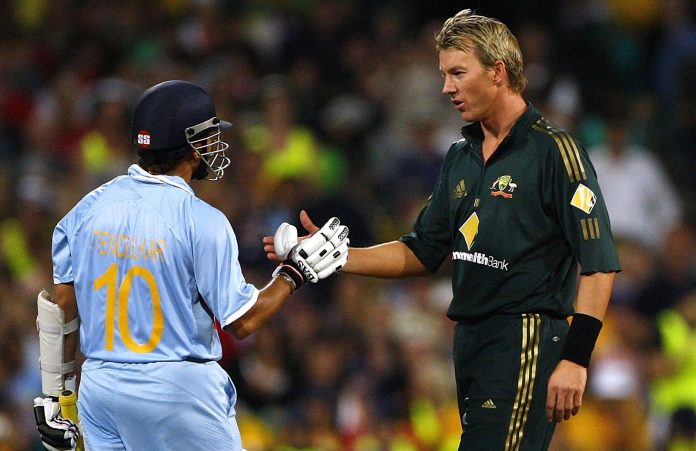 A YouTube video showing Australian batsman Damien Martyn pushing off former BCCI secretary Sharad Pawar off the dias (stage) has been floating on the internet. This has gone viral because of the two teams behaving in a winner situation. While Team India and Ajinkya Rahane gave Nathan Lyon a signed jersey, remembering what the Aussie team did, still angers the Indian fans.

Australian cricket can echo aggressiveness sometimes and amid all the sledging, off-talking and abuses that the Indian team saw during the Border-Gavaskar series of 2020-21, a video showing the over-aggression of the Aussies from 2006 has been hitting trends.

The Video Of The Australian Team That Went Viral

It was the finals of the very well fought Champions Trophy at the Brabourne Stadium, Mumbai. A very well-paced West Indies were to face Ricky Ponting’s dominant Australia that seemed to ride heavily on their streak at ICC events. Batting first West Indies raced to 49 without loss in five overs.

Brett Lee, Aussie mainstay had gone for 36 from three overs as Chanderpaul and Gayle were wrecking the bowling attack. However, Chanderpaul dragged one on to the stumps, got out but the Sarwan and Gayle continued hauling. West Indies reached 79 for two in nine overs with Lara, Morton, and Samuels waiting in the pavilion. What Was The Story About In That Game?

Then started the Bracken show. The Aussie dismissed Gayle and picked two more wickets in his five overs giving only 20 runs. McGrath found Lara s edge and Gilchrist took an excellent low catch. Morton edged one off McGrath. Samuels hit Watson to mid-on and then the house of cards fell. West Indies were bowled out for 138 in 30.4 overs after being 49 without loss in five overs.

Coming out to bat in a rain disturbed match Australia were set 116 from 35 overs in other words, which meant after scoring 45/2 in 10 overs, they needed only 71 runs in the next 25. Watson (57*) and Martyn (47*) reached there without much fuss. There were still 41 balls left to be played when Watson flicked Sarwan for the single that got Australia the elusive trophy.

The incident took place while the presentation ceremony. The then BCCI President Sharad Pawar had delayed handing over the trophy to the Australians. This led to a little agitation by Ponting. However, when Pawar handed over the silverware, the Australian’s seemed to have escorted him off the dais. There were allegations against them, especially Martyn, for pushing Pawar. The Indian media went after the Australians, calling them rude and arrogant.

Vengsarkar commented: You expect such behaviour from uneducated people. If they wanted to pose for photographs, they could have politely requested him. This is appalling.

Tendulkar added: It is important to show respect to a person who is so dear to the cricketers and is involved with cricket. Such incidents should be avoided.

However, Ponting did later clear off the fog, issuing an apology for Pawar and the BCCI boss also accepted it with grace. That did mean that the issue was cleared off rather quickly. It has eventually helped both the Indian and the Australian players. Due to the good relationship between the two teams, they have had fierce rivalries and friendships in the IPL now as well now.