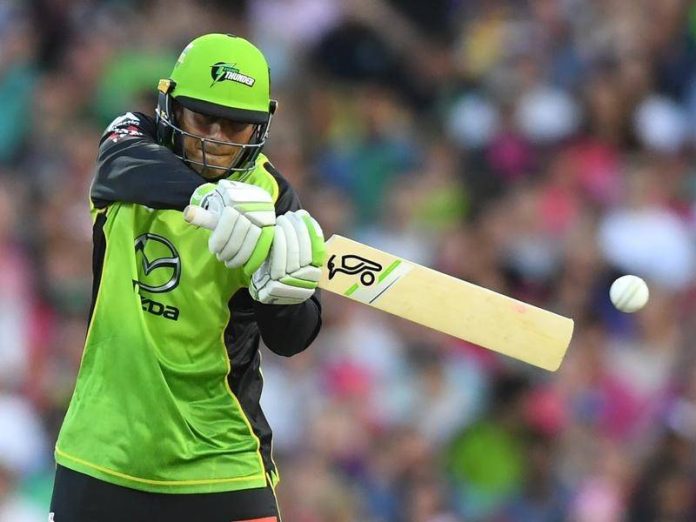 Sydney Thunder opener Usman Khawaja on Sunday starred all over the trends when he changed his abdomen guard in between the match, on the ground, delaying the proceedings. Khawaja when talking about the incident to 7 Cricket said it made him uncomfortable (I had a blowout).

The incident related to Usman Khwaja, which took place in the ninth over:

It was the ninth over of the game and Sydney Thunder hadn’t witnessed the explosive start they expected of their openers. Alex Hales – the tournament’s highest run-scorer was already back in the pavilion. However, Khawaja had shown intent of going big. As Marnus Labuschagne lined up on the other end, introducing his leg-spin in the game, Usman halted the proceedings for he needed to change his abdomen guard. The Aussie player was seen changing the guard on the big screen, leaving the audience giggling.

7 Cricket shared the video of Usman Khwaja on their Twitter handle:

Have … have you ever seen this before ?

Usman Khawaja had to change everything – on the field! ?#BBL10 pic.twitter.com/XOKsXkhLVS

7 Cricket asked fans if they have seen this before? “Have … have you ever seen this before ???? Usman Khawaja had to change everything – on the field! ????,” the Tweet read.

The video (Tweet) was then lined up with laughter and some funny assumptions. The fans could not stop talking about it. The incident was indeed funny and a first of its kind. That is what exactly left the internet in splits.

One user asked if Marnus – at the other end – was caught saying something on the mic. To that one more user replied,” He was Mic’ed up & they even asked him what does he think of it. He just said never seen anything like this. But someone at the back was like “we thought you’ll go full naked mate” Lynn I guess ??”

7 Cricket then put up Usman Khawaja’s statement. The left-handed batsman said, “I had a blowout, and then Lynny was getting into me…

“I am like mate, you always got to protect the McNuggets.”

Summary of the match; what next for the BBL?

Usman Khawaja managed 28 runs off 30 deliveries, falling to Labuschagne in the same over, as Pierson performed a quick stumping. The Thunders were kept quiet for most of the innings by some smart bowling by Swepson, Labuschagne, and Steketee but Ben Cutting managed to hit four sixes and a boundary in the death to boost the score. Cutting scored 34 runs off 18 balls leaving the pitch unbeaten. He was supported by Sam Billings – who survived owing to a dropped catch – as he scored 34 runs off 24 balls.

The Brisbane Heat – riding on Sam Heazlett’s second BBL half-century– chased the 159 run target with five balls to spare. Heazlett scored an unbeaten 74 off 49 balls. Jimmy Pierson scored a 23 ball 43, taking the team one step closer to the finals. Brisbane Heat will face Perth Scorchers on February 4 as the winner plays Sydney Sixers in the finals.