The third Test match between India and England has been full of action. Virat Kohli and co. have a slight advantage in the game, which has seen wickets fall like a pack of cards. On day 2 of this Test match, it is England already batting in the second innings. Hence, a result seems to be ensured in the match as well.

Both teams are keen to get a win and are fighting really hard to outfox each other. What that being said, things are looking rather volatile in this game. It is fun to see the players compete at the top level.

What This One Fan Did For Virat Kohli That Got Social Media Talking?

One fan breached the security to meet the Indian captain. King Kohli has his set of fans and the love is endless. With that being said, the man came all the way in to meet this cricket legend. The play was stopped till this fan went out of the ground.

The Narendra Modi Stadium produced some great moments on day 2. This bizarre incident was of the fan trying to hug him. A clip did the rounds on Social Media. The fan was seen running all around the playing arena, as he tried to reach the 32-year-old.

Virat Kohli’s reaction was just priceless. He was stunned for a moment and below is the Tweet of his reaction.

Sometimes Things Can Go Berserk If Not Careful, Luckily Nothing Happened

Virat Kohli had spoken about his concern about the lights. He had said in his interview before the toss, “We would have batted first as well. We would look to get into the game early on. The practice wickets have been quite spicy. Something that we have enjoyed as a team. It is such an exciting atmosphere here at the largest cricket stadium.”

“I am a bit worried about the lights. We have played in a similar stadium in Dubai. You need to adapt pretty quickly.” 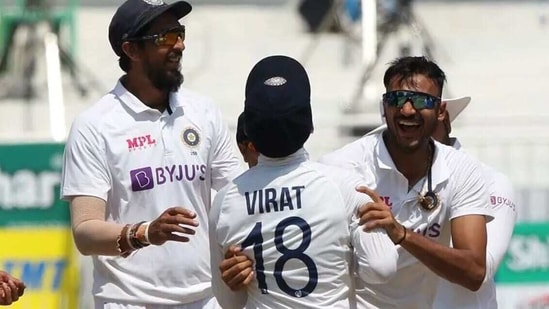 Team India And Virat Kohli Have The Advantage In This Game

After 19 overs of England’s second innings, they were placed at 56/5. Team India seemed to have things in control. However, this Test match was seeing its constant wobbles. The game was shifting gears at times and either team could win it.

England only led by 23 runs and it was surely a low-scoring game that seemed would end soon. It looked as if the match would not last more than three days. Not the best batting pitch to say the least. Finally, the bowlers had some say in the game.

Axar Patel had taken ten wickets in the game already and looked brilliant with the ball. He was surely in contention to be the Man of The Match. Virat Kohli had lost the toss but was winning the plot. The game was in Team India’s control. However, it wasn’t just done yet!!