The Rishabh Pant Decision- Some cricket rules always catch the headlines due to the confusion they bring along with them. There has been constant confusion regarding the Umpire’s call during reviewing LBW and the soft signals. Both of these aspects have also been a matter of debate in the last few days. Now, another ruled during the second ODI between India and England has been the cause of confusion for the fans.

In the 40th over of the Indian innings, when Tom Curran was bowling, Rishabh Pant tried his famous reverse lapse shot. He had earlier successfully attempted this shot against Jofra Archer and James Anderson in T20I and Test series respectively. However, this time around the ball was too full for the successful execution of the shot and Pant missed the ball. 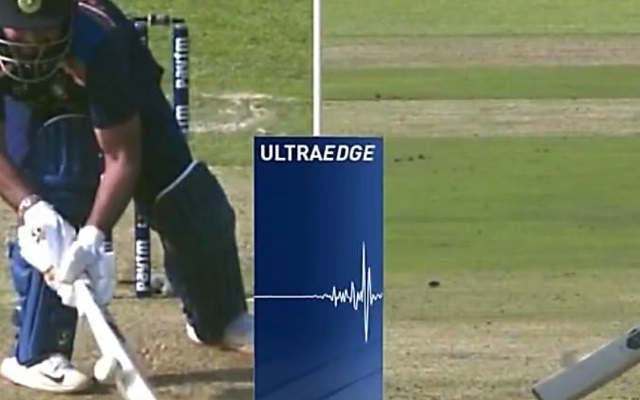 In real-time, it felt like the ball hit Pant’s pads and went past the leg stump for a boundary. England players appealed in unison for LBW and the umpire also gave him out. Pant had no hesitation to go for the review and the replays showed that the ball has hit his bat. The on-field umpire’s decision had to be overturned.

The confusion lies at this points that Pant was given not out but the umpires did not award India with the four runs to their total. The ball raced to the boundary after it hit the bat’s edge.

This confused the viewers as they felt that the umpires have done a mistake not award India a boundary. However, this is not the fault of the umpires. The ICC rule book says, once the Umpires give a batsman out, the ball becomes a dead ball then and there. Even if the umpires overturn the decision later, it will still stay the same, as what happens after the batsman is given out, is not taken into account.

In the scenario, the on-field umpire gave Rishabh Pant out LBW. After his signal, the ball hit the boundary fence. Hence, this boundary will not stand as it does not matter whether the batsman ran for a couple or it was a boundary, from the moment he was adjudged out.

This rule confuses the fans as India did not get the valuable four runs. These rule can attract more criticism, once the team loses due to these runs going forward, just like New Zealand lost in the ICC Cricket World Cup 2019 final due to the boundary count rule.

Here is what former cricketer turned Pundit, Akash Chopra had to say after the incident-

So, Pant lost on 4 runs because of a glaring umpiring error. Repeating this for 101010364th time—what if this happened on the final ball of the World Cup final with the batting team needing 2 to win??? Socho Socho…. #IndvEng

The Match Situation; Team India Has The Advantage?

Indian batsmen once again inflicted serious damage on the English bowlers at the death. Sam Curran, his brother Tom and Ben Stokes all had to face the wrath of the Indian batsmen. Pant scored a fiery 77 runs off 40 balls. At one stage he looked set to score the fastest century by an Indian batsman in ODI’s.

He failed to score the century. However, his knock included three fours and seven sixes. This gave the much-needed launch pad for a big score for Team India. Hardik Pandya continued the onslaught forward as he scored 35 runs off 16 balls. He hit four fours and four sixes during his innings. Due to the power-hitting of Pant and Hardik at the end, India posted a total of 336 runs after 50 overs.

The England batsmen will now have to come out firing. It will be interesting to see how the English batsmen go about their business in this match. They lost their way out in the middle in the last ODI.