WATCH: Video Shows MS Dhoni Has Still Got It As A Captain After Dismissing LBW Appeal

Chennai Super Kings faced off against the Punjab Kings in the eighth match of the 14th edition of the Indian Premier League (IPL). Chennai Super Kings performed incredibly well after their defeat against Delhi Capitals in their opening match of the campaign. MS Dhoni and Co. beat KL Rahul’s boys by six wickets and 26 balls in hand.

The Story Of The Game Dominated By The Team From Chennai

Watch More: One Of The Most Amazing Shots Played In The Game Of Cricket

At one point in time, Chahar and captain MS Dhoni shared a light moment between themselves. Having already picked up three wickets, Chahar was bowling the third over of his spell. He appealed for an LBW decision.

Punjab Kings was reeling at 19/4, and at one such moment, Deepak Chahar appealed for an LBW decision. Skipper MS Dhoni completely neglected his appeal. Chahar was excited and tried to convince Dhoni in all possible ways. However, Dhoni did not entertain his thoughts and said ‘Ja Ja’.

Chahar bowled an incredible spell in this match. He picked up 4 wickets in his fours overs and gave away just 13 runs. Chahar blew away the Punjab Kings’ top order. He accounted for the wickets of Mayank Agarwal, Chris Gayle, Nicholas Pooran, and Deepak Hooda in a quick span.

Read More: Crazy Sam Curran Celebration That Stunned His Team-Mate Ravindra Jadeja; Not What He Expected For Sure

While Chasing the target, CSK did suffer a jolt, but by then they were already at the brink of victory. With this win against Punjab Kings at the Wankhede Stadium, CSK climbed up to the second spot in the points table just below Royal Challengers Bangalore. CSK suffered a horrible season last year, having failed to qualify for the playoffs for the first time in IPL history. Captain MS Dhoni also did not have an IPL to talk about. So, the CSK captain will be hoping that they build on this win and do better in this year’s tournament. 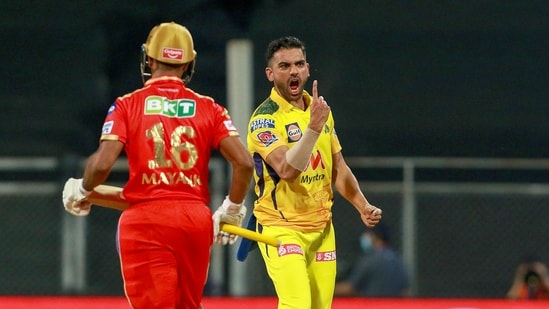 On the other hand, Punjab Kings will have to sit down and think about what went wrong for them. That is before they face off against Delhi Capitals in the next match on Sunday. It will be a crucial game for their morale. They will want to get back to winning ways and get some key points. This could determine how things go for the team from Punjab from here on. For MS Dhoni and co., things can only get better if they keep playing the same way that they did against PBKS.