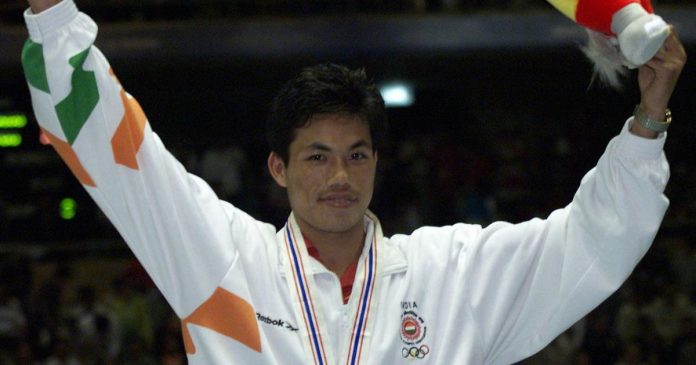 There is some unfortunate news coming in, as confirmed by various media outlets. The story is about former Asian Games Gold Medallist Boxer Dingko Singh.  Reports have confirmed that ex-Indian boxer Ngangom Dingko Singh, who won a gold medal in the 1998 Bangkok Asian Games, has sadly passed away on the 10th of June, Thursday.

The Story That Broke Out About Dingko Singh By India Today

The report further went on to add that the bantamweight boxer was battling a prolonged illness. He was diagnosed with liver cancer and was undergoing treatment for the same since 2017. The 42-year-old boxer had also contracted COVID-19 in 2020 but eventually recovered.

The news of his recovery was positive, though the complications arising due to the disease still a matter of concern. Keeping that in mind, Dingko Singh was undergoing constant checkups and procedures, to ensure that his health was fine.

The Tweet Sent Out By Union Sports Minister Kiren Rijiju

The reason that Dingko was well known is due to the fact that he ended India’s 16-year wait for an Asian Games boxing victory. He made a name for himself in the bantamweight division in Bangkok. For his achievements, he got bestowed with the Arjuna award in 1998.

To add to that, he was also given the nation’s fourth-highest civilian honour — the Padma Shri — back in 2013. Unfortunately, his success was short-lived and his health issues took charge eventually.

I’m deeply saddened by the demise of Shri Dingko Singh. One of the finest boxers India has ever produced, Dinko’s gold medal at 1998 Bangkok Asian Games sparked the Boxing chain reaction in India. I extend my sincere condolences to the bereaved family. RIP Dinko? pic.twitter.com/MCcuMbZOHM

Fight Against Cancer Lost By Another Legend; Who Made India Proud

It was sad to see the Indian boxing fans express their sorrow on Social Media platforms, watching another legend lose his life to CANCER. Already, the pandemic has hurt the Indian people enough. This was an added blow to their hopes and aspirations to getting back to normal life soon.

Dingko was an inspiration to many and his fight against his ill-health was the best example of his nature as a man. The sad news took a lot of people by shock and the memorials and tributes starting pouring out.

Shri Dingko Singh was a sporting superstar, an outstanding boxer who earned several laurels and also contributed to furthering the popularity of boxing. Saddened by his passing away. Condolences to his family and admirers. Om Shanti.

Ngangom Dingko Singh’s untimely demise has saddened me. He was a great boxer and an exceptional sportsperson. His life was brief but will remain inspiring to the youth, especially from Manipur, for long. My condolences to his family and fans.

Some stories are just really heartbreaking and the end to a legend’s life was nothing something everyone can possibly digest. Gone too soon, Dingko Singh!!