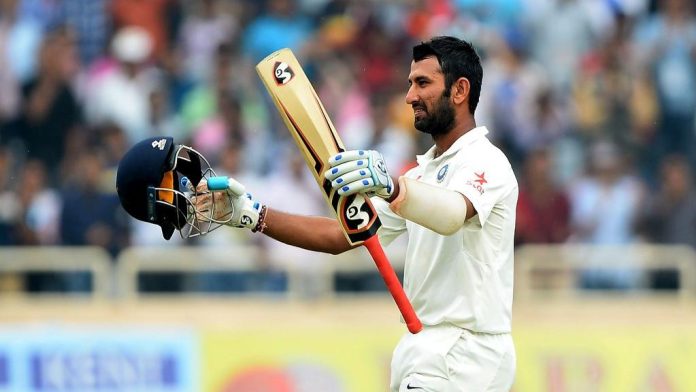 Comparing Pujara To This Former Arsenal Star; Funny- The second Test match between England and India started off with a great first day for the visitors. Team India was asked to bat by Joe Root and they did not disappoint. Openers Rohit Sharma and KL Rahul played some really positive cricket. They dominated the English bowlers at Lords and took the game to the opposition. This gave their side the advantage over the English side.

However, Test cricket is a long and patient man’s game. Keeping that in mind, the first Indian wicket eventually fell at 216. In came, Cheteshwar Pujara, who had not been in form. He had a lot to prove and all eyes were on him. The whole nation of India was looking at the player for inspiration and to add to the already mammoth score, that had given the team the perfect start in a Test match.

What Happened When Cheteshwar Pujara Got Out And The Troll On Twitter Comparing Him To This Former Arsenal Star?

It is never easy to follow up on one of the best starts that a team can get in Test cricket. A 200+ score with no wickets lost is hard to beat. The same was the case with Pujara, who tried to continue from where Rohit Sharma had left off when Jimmy Anderson got him out.

He came in to bat at a crucial time, as it was the time to rebuild and continue. KL Rahul was looking as solid as ever. Despite that, Pujara couldn’t do much and eventually threw away his wicket. He became the second victim of some brilliant fast bowling by Anderson.

The shot was poor and the fans were unhappy. Amongst all the Twitter banter and trolls, one fan had a brilliant comparison. He compared the failing star to former Arsenal midfielder Mesut Ozil. The ex-German international had a poor ending to his career at the Emirates. The Tweet that was sent out was just funny.

What Next For Team India And For The Gunners With Big Things To Follow?

The new Premier League season is nearly upon us. Mesut Ozil is now in Turkey. Team India has an advantage in this second Test. A perfect combination of cricket and footballing news and the world must be enjoying what they are watching at present. On the bright side, the fans will be loving the action after a tough couple of years. The players must also be feeling the pressure and this pandemic has spared no one. Hopefully, the return of fans in stadiums can bring back the fun factor in the games. Let’s hope that both Team India and Arsenal have a great season ahead.

Some really key competitions are on the way for the Gunners. This league season will be quite crucial for Arteta and his future at Arsenal. On the other hand, the T20 World Cup for Team India and the rest of the cricketing sides. What a time it is going to be for the fans and they will absolutely be loving every minute of it.