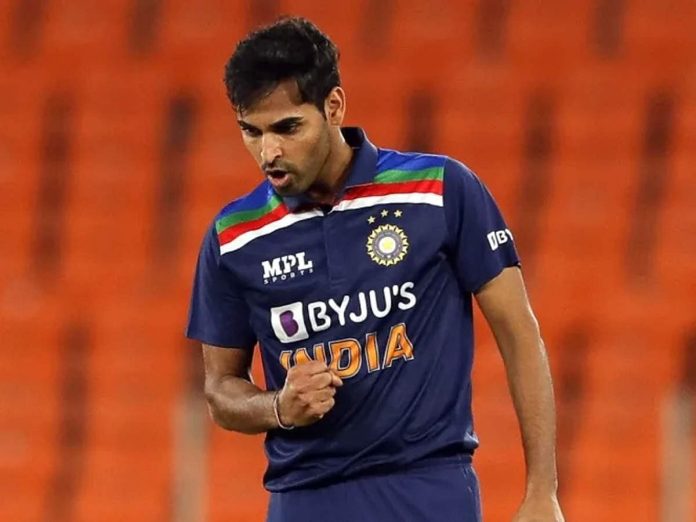 The Bhuvneshwar Kumar Beauty!! Only three days after the conclusion of the Twenty20 World Cup, India and New Zealand met in Jaipur for the first of a three-match Twenty20 International series. Despite the fact that a large number of players from both countries who participated in the previous event are not participating in this series, it has provided a fantastic chance for other players to step up with the next World Cup just 11 months away.

Speaking of stepping up, experienced swing bowler Bhuvneshwar Kumar was dropped from the playing XI just after the game against Pakistan, but he was brought back for the first Twenty20 International against New Zealand today.

Despite having a poor performance in the second leg of the Indian Premier League, the team management decided to send him to the World Cup. Bhuvneshwar must have been under immense pressure to perform to his full level, and it’s understandable. Moreover, the guy demonstrated his incredible new ball abilities in the very first over after Rohit Sharma won the toss and was elected to field. Due to the fact that the game was played on a new surface, there was some swing available for the bowler, which Bhuvi took advantage of to perfection. With the Kiwis’ World Cup hero Daryl Mitchell coming on strike for the first time in the match, he bowled a jaffa to him. First two balls, he bowled a pair of outswingers to Martin Guptill and gave a single.

Bhuvneshwar to Daryl Mitchell, out Bowled!! A first-ball duck for Mitchell – when he gets his swing going, Bhuvneshwar is dangerous and he just showed as to why he’s still rated so high back in India
Vintage bhuvi delivery#INDvsNZ

In terms of the team’s composition, New Zealand was already missing Kane Williamson from the T20I squad before the match was scheduled to take place. They made three further changes, omitting (or resting) Adam Milne, Jimmy Neesham, and Ish Sodhi from the starting lineup. Mark Chapman, Todd Astle, Rachin Ravindra, and Lockie Ferguson were all named to the starting XI for the first time.

Meanwhile, India selected Deepak Chahar, Shreyas Iyer, and Axar Patel in the playing XI, despite the fact that all three were part of the travelling reserves for the T20 World Cup. Venkatesh Iyer made his international debut for India in the shortest format of the game, becoming the 93rd player to represent the country. The second leg of the IPL 2021 saw him recognised for his outstanding all-around abilities, and it remains to be seen if he lives up to his promise in the future.