Liverpool has booked their place in their first domestic cup final since 2016 after beating Arsenal comprehensively in the Carabao Cup semi-final second leg at the Emirates. After the 0-0 draw in the first leg at Anfield, Mikel Arteta’s men had a great chance at home to take themselves closer to their only possible silverware this season.

They started very brightly in front of a noisy Emirates crowd but slowly started to chase shadows as Liverpool started dominating. Diego Jota’s brace in both halves was enough to seal Liverpool’s place in the final in Wembley next month against Chelsea. Jurgen Klopp looked very happy after the game and said that he saw some brilliant performances from his boys.

In a crucial fixture, Liverpool’s attack was without Mo Salah and Sadio Mane. Both are on their duties in the AFCON as Klopp gave Diogo Jota a start. The Portuguese striker did not disappoint as he was the difference between the sides on the night and his brilliant display in front of the goal in both halves sealed the game. 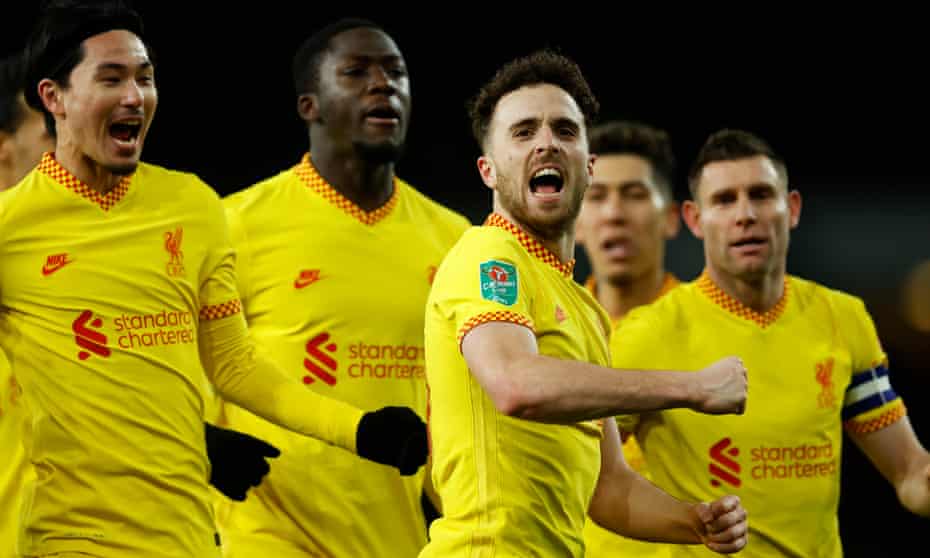 2. Lacazette could not deliver in this crucial game for Arsenal in the Carabao Cup

The Frenchman hit the bar from a free kick in the first half and that was the most highlighted part of his performance on the night. He missed an easy opportunity later on after breaking down Liverpool defence brilliantly. If he managed to put the ball in the back of the net at that moment, the match could have possibly swung into Arsenal’s favour.

It was a dominant display in midfield again from the Brazilian who was almost everywhere on the pitch to win the ball back for his team. Fabinho made a brilliant tackle on Martinelli when the Arsenal forward was through on goal highlights how important he was for Liverpool on the night.

4. Martinelli was the only concern for the opposition

The only player who caught the eye for the home side is once again Martinelli. The Brazilian winger created many problems for the Liverpool defence whenever he had the ball. Even the opposing manager, Jurgen Klopp, said, after the game: “Martinelli, by the way, everyone should remember that name. Outstanding player.”

Indeed, the Brazilian ran his heart out and keep going at the visiting team’s defence. He ran till the final whistle but to no avail. He did get another brilliant chance towards the end of the match but it just did not stick. Not his day to say the least.

5. No Silverware for Arsenal again this season

This is the first time that Arsenal is not in any cup competition by the end of January since 1989/90. That sums up another disappointing campaign. From now they will be playing only a game every week and finishing in the top four is all they can target by the end of the season.