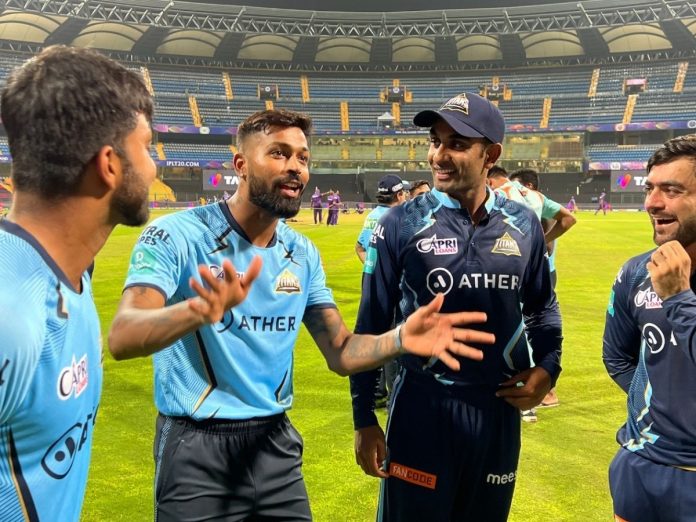 IPL 2022 Final Live Update: The surprise success of the Gujarat Titans (GT) in the Indian Premier League (IPL) 2022 has been ascribed by former Indian cricketer Aakash Chopra to the fact that the team has been able to generate new match-winners in each of their games.

Chopra noted that almost every member of the playing XI makes a meaningful contribution. The opposing team can never let their guard down.

They defeated the Rajasthan Royals (RR) by seven wickets in the first qualifier of the IPL 2022. The Gujarat Titans became the first side to qualify for the final.

Several players for Gujarat, including its captain, Hardik Pandya, David Miller, Mohammed Shami, and Rashid Khan, have contributed to the team’s success by delivering outstanding performances under duress.

Gujarat is now anticipating the outcome of Qualifier 2 on Friday in Ahmedabad. It will be played between Rajasthan Royals and the Royal Challengers Bangalore (RCB). On Sunday, the victor of the match will face GT in the championship game of the IPL 2022.

During a question and answer session that was hosted on Chopra’s YouTube channel, he was questioned about his thoughts on the subject of why Gujarat had been so successful in their first season competing in the Indian T20 league. His opinion was:

“What has distinguished the Gujarat Titans from the other teams is the fact that each of their games has been won by a different player. It is a very strange thing to say, yet this is the truth of the matter.

Different players have made themselves count by putting their hands up in tough circumstances and standing up for what they believe in. In GT, match-winning efforts have not been limited to a group of three to four players. No one will be able to prevent such a squad from coming out on top.”

In the first qualifying round, Gujarat triumphed against RR with a resounding victory. They needed to score 189 to win. They did it with seven wickets remaining. It is thanks to Miller’s unbeaten 68 off of 38 balls and Hardik Pandya’s unbeaten 40 off of 27.

IPL 2022 Final Live Update: Aakash Chopra said that the ICC should adopt a playoff format similar to that of the Indian Premier League

GT has already secured its spot in the IPL 2022 final by its victory in Qualifier 1. They still would have had a chance to advance even if they had been defeated by RR.

Moreover, the team that finishes in second place in the first qualifying match, which is played between the top two teams in the rankings, will have the option to compete in a second qualifying match.

When Chopra was asked whether it was time for the International Cricket Council to implement a similar playoff mechanism for major tournaments such as the World Cup, he agreed:

“There is no question in my mind that the ICC needs to adopt a playoffs format similar to that of the IPL. However, this strategy is only viable in the context of a round-robin tournament. Every single team competes against every other team at least once. If the teams have already been split up into groups, then you will have no choice but to go on to the quarterfinals, semi-finals, and finals of the competition.”

The T20 World Cup 2021 was contested in a group system. Additionally, the top two teams from each of the two groups advanced to the semifinals to compete for the title. In the group stage, Pakistan was the only team who did not suffer a loss, However, in the semi-final, they were defeated by Australia by five wickets.