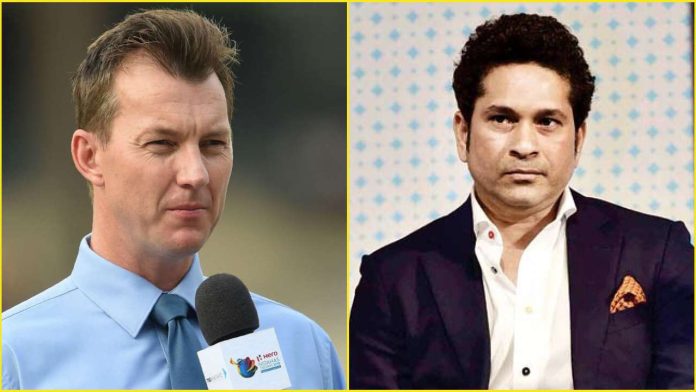 Latest Cricket News: Not only was Sachin Tendulkar the most accomplished batsman of his period, but he was also widely regarded as one of the game’s finest cricket players. Even though it has been nine years since Tendulkar announced his retirement, he is still one of the most adored legends of all time. Due to the nature of the period in which he played, Tendulkar was one of the few players who could get applause from the opposing fans. It is not difficult to see why so many bowlers regard him as the best batsman they have ever faced. It is considering the vast number of batting records he has amassed over the course of his career.

The bouts that Tendulkar fought against some of the best bowlers of his age, including Glenn McGrath, Wasim Akram, Allan Donald, Shane Warne, Muttiah Muralitharan, and Shoaib Akhtar, are among his most memorable. Legends like James Anderson and others exist. However, there is one bowler who has a record that none of these other bowling legends have. Brett Lee, a former Australia pacer, holds the record for having dismissed Sachin Tendulkar the most times in international cricket, with 14 total dismissals. There have been innumerable bouts between Lee and Tendulkar. In fact, on Brett Lee’s debut for Australia in the Tests, Sachin struck a hundred during the Sydney Test in 1999. In contrast, Lee had the chance to bowl at Tendulkar for the very first time in a practice match that lasted for three days before the start of the three-Test series. It was one of those fanboy moments for Lee. He wanted Tendulkar to sign an autograph for him. However, Lee ultimately opted not to do so. The following is the rationale for his decision.

“My first encounter with Sachin Tendulkar was way back in 1999. It was an unforgettable one. I was competing for the Prime Minister’s XI squad in Canberra, where we were, against the Indian team that was on tour there. Of course, Sachin Tendulkar participated in the match as well. When he walked out to bat, I had the sudden realization that I would be bowling to the legendary Sachin Tendulkar. I was truly interested in getting an autograph from him. So I decided to hand him the ball and ask, “Hey, buddy, would you be so kind as to sign this?” But then I had the realization that it wouldn’t look good for my first impression competing against the great Tendulkar. So I decided to change my strategy,” Lee mentioned on his channel on YouTube.

Lee, who had always wanted the opportunity to bowl to Tendulkar, was able to achieve his goal of getting Sachin out of the game. This made the event even more memorable for him. It was a cherry on the top moment for Lee. As the world would go on to witness, it was the first chapter in the memorable struggle between him and Tendulkar that would unfold over the following 13 years. The war would last for the whole of Lee’s career as a cricket player.

“When I was a youngster, I used to watch him grow up. Then one day I found myself with the ball in my hand. I was thinking about how I was going to get this person out. I was able to get the better of him. After the match, we exchanged handshakes. When I did so, I was overcome with admiration for this magnificent guy,” said Lee.