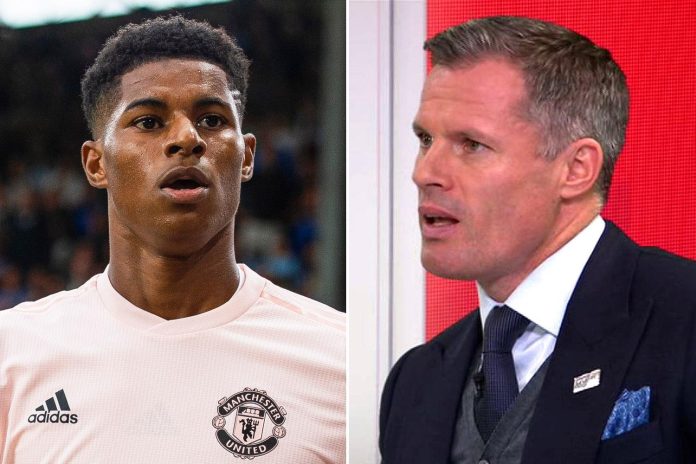 The 24-year-old forward had a terrible season with the Red Devils in 2021-22. He scored just four goals in the Premier League. He was also being moved in and out of the starting XI during the course of the season.

It was a symptom of a more significant issue that was hurting the team. They oversaw a dreadful run on all fronts. This includes placing sixth in the league with their lowest-ever points total in the competition. It was a symbol of a broader problem that was affecting the team.

Carragher believes that Marcus Rashford is “not good enough” to play for the club any longer. His performance level has considerably declined over the last few months. Rashford was somewhat of a talisman for the club in the past.

What did Carragher say?

The statement was made by the former Liverpool player during an interview with Gary Neville for the YouTube channel The Overlap (The Daily Mail).

Alex Crook, a contributor for talkSPORT, claims that the incoming manager at Manchester United, Erik ten Hag, would provide Rashford with an opportunity to save his career over the next season.

It has also been stated that the forward would engage in some “tough training” in the United States. He has to be ready to make an immediate impact under the direction of the Dutchman.

Manchester United will have a busy time next summer. Several players will leave the club while others, including a new striker, are anticipated to join.

In the previous season, the Red Devils only scored 57 goals in 38 Premier League games. Of those 57 goals, a third (18) were contributed solely by Cristiano Ronaldo.

Ten Hag has his eyes set on roping in a new striker who can complement the Portuguese ace with several goals and challenges for the crown. Currently, the team’s performance is nowhere near strong enough to compete for the title.

There is still a significant amount of work to be done. But strikers such as Benfica star Darwin Nunez, Napoli ace Victor Osimhen, and RB Leipzig’s dynamic Christopher Nkunku have been mentioned as possible transfers.

Ten Hag may have ideas for Rashford as well. But there is little doubt that he will have to compete with the incoming players for his position once they come. So, we have to now wait and see what happens to Rashford. However, only time will reveal that.