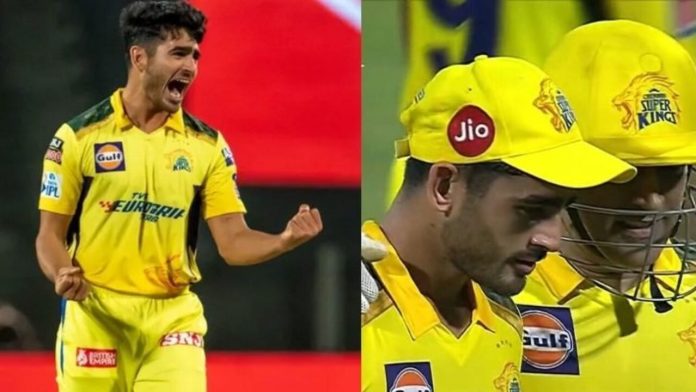 RCB vs CSK Live Update: Mukesh Choudhary has succeeded in building a name for himself by making the most of the possibilities that have presented themselves to him while playing for the Chennai Super Kings (CSK). The left-armer has produced numerous fantastic spells in the current IPL 2022 season. But it was his toe-crushing yorker to Mumbai Indians batsman Ishan Kishan that garnered the most attention.

Meanwhile, the young pacer has commented on the distinct leadership styles of MS Dhoni. At the same time, Choudhary has selected his all-time favorite on-field moment involving the legendary cricketer. It happened to be that memorable six-off Sri Lankan pacer Nuwan Kulasekara in the 2011 World Cup final at the Wankhede Stadium in Mumbai on April 2, 20211.

MS Dhoni has a wealth of expertise: Mukesh Choudhary

“I get chills every time I watch the winning six. When Dhoni Sir struck the game-winning six and embraced Yuvraj Singh, I knew I wanted to play for India one day as well. I used to play cricket. But it wasn’t until that momentous day that I started to take the game more seriously. The 2011 World Cup squad “motivated me tremendously,” according to Mukesh, who spoke to The Times of India.

“I discussed the victory with Dhoni sir. He has a wealth of information,” he continued.

Mukesh was allowed to play a regular role in CSK’s playing XI when all-rounder Deepak Chahar’s campaign was cut short owing to injury concerns. It should be noted, however, that Choudhary has a significant amount of experience under his belt. He has taken 17 scalps in 12 List A matches while representing Maharashtra in his professional career.

RCB vs CSK Live Update: RCB and CSK will face off in the next game

So far, the developing cricketer has taken 11 wickets from eight matches. He has an average of 25.45 and an economy rate of 9.82. In the future, he would want to have his name included on the Purple Cap list of notables. With their recent 13-run triumph against SRH, Chennai Super Kings will be hungry to add another victory to their tally when they take on a demoralized Rajasthan Royals at Pune’s MCA Stadium on May 4.

What did MS Dhoni say in the post-match presentation?

In response to a question about what the Chennai Super Kings did to get back on track after turning over their leadership to the veteran, MS Dhoni said, “There was nothing unusual.” MS Dhoni returned to the captain’s chair after eight games in the season. Chennai Super Kings were able to pull up a victory against the Sunrisers Hyderabad on Sunday (May 1) in Pune. While delivering his post-match presentation speech, Dhoni said that the openers’ 182 run partnership for the first wicket had laid the foundation for the triumph.

Additionally, Dhoni claimed that he only promised to assist Ravindra Jadeja for the first few weeks of the season to ease the captaincy transition. He also wanted to let Jadeja learn the craft on his own. However, Dhoni felt that captaincy responsibilities were affecting Ravidra Jadeja. Hence, the management took this decision.