Wanindu Hasaranga Talks About His Relationship With Yuzvendra Chahal 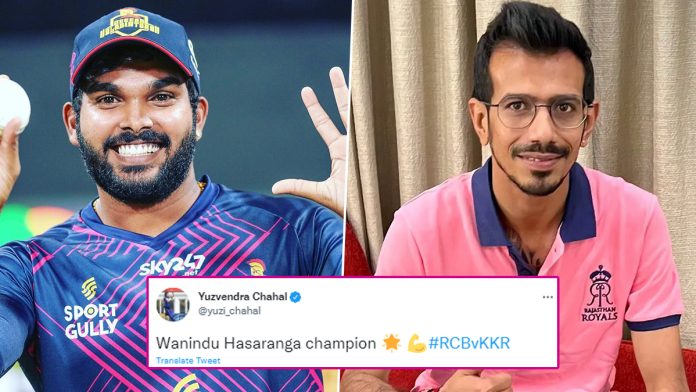 RCB vs PBKS Live Update: Wanindu Hasaranga, a spinner for the Royal Challengers Bangalore (RCB), has revealed some information about his relationship with Yuzvendra Chahal, another leg spinner. The two bowlers have taken a combined 43 wickets so far in the Indian Premier League (IPL) 2022. They have helped their team to dominate with their bowling performance.

The previous season was Hasaranga’s debut in the tournament. He did so on the strength of a successful home series versus India. In the mega auction, the Royal Challengers Bangalore (RCB) paid a total of 10.75 crore rupees to get the services of the Sri Lankan spinner as a reward for his achievements. Hasaranga was promoted to the position of the team’s primary spinner. Chahal was released from his contract with the franchise.

RCB vs PBKS Live Update: What did Hasaranga say? Wanindu Hasaranga made a statement on “RCB Bold Diaries,” in which he said that he and Yuzvendra Chahal are excellent friends both on and off the field:

“Because of our shared experience during the second part of the previous season, Yuzi and I are extremely close friends. I am always appreciative of his bowling. I know that he feels the same way about me.”

Hasaranga’s accomplishments in the field have always received Chahal’s support and encouragement on social media. Earlier in the competition, while he was bowling against the Kolkata Knight Riders (KKR), he referred to the Sri Lankan player as a “champion”.

It took Wanindu Hasaranga some time to establish his stride in the present competition. But ever since then, he has been a formidable opponent who cannot be taken lightly. He just became the third spinner for RCB to record a five-wicket haul during the team’s recent victory against Sunrisers Hyderabad. This victory was a comprehensive one for the RCB.

The wicket brought him within striking distance of Chahal in the competition for the purple cap. There is just one wicket between him and Chahal at that point.

Hasaranga attributed the establishment of a warm and welcoming atmosphere inside the franchise to the efforts of the coaching staff as well as the players, saying:

“The atmosphere amongst the players is always one of a close-knit family. Thus, making this seem like one of the most successful franchises ever. My bowling has always had the backing of Sridharan Sriram, as well as that of the head coach and Mike Hesson. It is to our advantage that each of them has a great deal of coaching expertise.”

RCB vs PBKS Live Update: RCB hopes to get into the playoffs

Following the home series against India, which is credited with putting Hasaranga on the map, he has had a very successful year on the calendar. He is regarded as one of the best spin bowlers in the shortest format. He led all bowlers in the 2021 Twenty20 World Cup in terms of the number of wickets he took.

As the playoff round approaches, the player will be hoping that his impressive run of form will carry over into this stage of the competition. He is just 24 at present and has a long way to go. In their pursuit of a spot in the playoffs, RCB will be competing against quite a few teams and will want to hold on to their fourth spot.