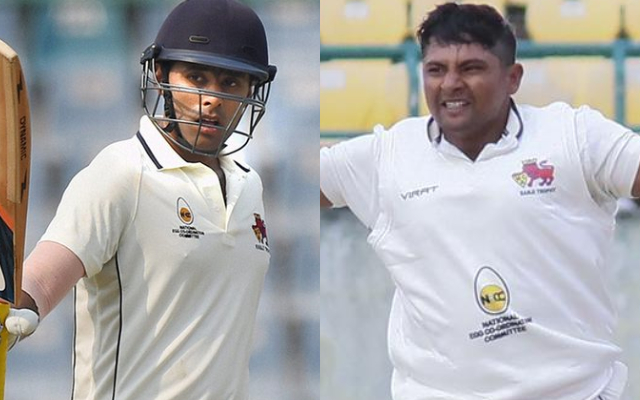 Ranji Trophy 2021/22: To speed up his recovery from an injury, India and Mumbai star Suryakumar Yadav is now attending physical therapy sessions at the National Cricket Academy (NCA). However, this has not prevented him from cheering for his own team as they compete against Uttarakhand in the quarterfinals of the Ranji Trophy.

In recent Ranji Trophy competitions, Sarfaraz Khan has been performing at an astonishingly high level. On Tuesday, the 24-year-old player posted a score of 150 or higher for the sixth time in only his past 13 innings of playing in the tournament.

He has been creating quite a stir in Indian domestic cricket. Suryakumar Yadav has no doubt seen the exceptional potential he has. The 31-year-old player turned to Twitter to offer his congratulations to Sarfaraz on his spectacular run of form.

Suryakumar Yadav also congratulated newcomer Suved Parkar for a brilliant 252 on debut. On his debut in domestic cricket for India, the player, who is 21 years old, scored 41 runs. Thus making him the fourth-highest run-scorer on debut in Indian history. All three of the top scorers, Prithvi Shaw, Yashasvi Jaiswal, and Arman Jaffer, got off to good starts. But none of them was able to turn those starts into a hundred. Nevertheless, the youthful Parkar proved to be more than capable. He had the help of the prolific Sarfaraz Khan.

The two blasted the Uttarakhand bowlers and put together a remarkable partnership for the fourth wicket that totaled 267 runs.

At the beginning of the game, Sarfaraz was in the lead with an astounding 153. After the partnership fell apart, though, Parkar took over and shifted gears to make sure that his squad could rack up as many runs as possible.

Following Parkar’s dismissal on 251, Mumbai declared their innings on a massive 647/8. They have already put Uttarakhand in a difficult position. They have lost a handful of wickets in a short amount of time.

Now is the time for Prithvi Shaw and his team to capitalize on the opening they’ve been given to put pressure on the other team and go to the semifinals.

The next Twenty20 International series between Team India and South Africa will begin on June 9 and consist of five matches. It will not include Suryakumar Yadav. During the most recent iteration of the Indian Premier League, which just finished, the middle-order batsman for the Mumbai Indians (MI) sustained an injury to the muscle in his left forearm while competing against the Gujarat Titans (IPL 2022).

After missing the beginning of the competition due to injury, the right-handed batsman made his return with a knock of 52 runs while playing against his old team, Kolkata Knight Riders (KKR). After that, he scored 68 runs off of 37 balls in a match against Royal Challengers Bangalore.