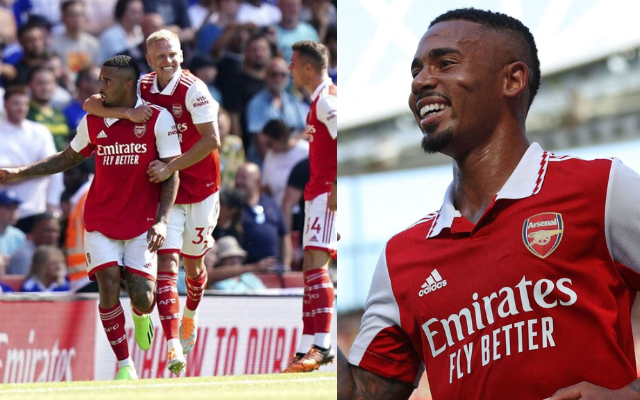 Arsenal vs Leicester City: 1st Half

Arsenal vs Leicester City: Both Arsenal and Leicester City got off to a strong start at the Emirates on a very hot afternoon. As the teams got to know each other on the field, they moved around a lot but also stayed in order.

Jesus and Martinelli stood out because they were so active and gave the other team’s defense a hard time. In the first few minutes, the second player was a threat to Fofana with his direct dribbling, and a defender got a yellow card for pulling the Brazilian back down the left side.

The gunners were consistently attacking

The team in blue also had trouble with the left side of Arsenal. Zinchenko took up the inside left channel of the midfield area when his team had the ball. This allowed Xhaka to move from the left midfield to the center of the field to attack. Leicester was surprised by Xhaka’s movement, as he kept showing up in the box to help the forwards.

The Swiss player had a shot that hit the post, but his next touch in the box was a light pass to Jesus, who chipped the ball over Danny Ward’s head to give Arsenal the lead at home. 1-0 Arsenal.

If Jesus’s first goal showed off his technical skills, his second goal showed off his instincts as a hunter. Martinelli’s ball floated into a corner, where it was turned in by a player at the near post. Some players were confused by the change in the ball’s path, but Jesus was smarter than most. He was at the back post to receive the ball and head in without being stopped, which gave him two goals for the day.

The goals gave the team even more energy, and Jesus was especially dangerous as the attack’s spearhead. If it hadn’t been for Ward in goal, the striker could have scored a few more goals.

With Vardy’s outball for the away team, the Foxes showed how good they were at counterattacking. At the end of the first half, Leicester sent Vardy down the inside right channel, which almost caught Arsenal off guard. Ramsdale ran out to stop him, and it looked like he had run into the old fox. For once, VAR did its job and changed the penalty call because there didn’t seem to be much contact.

Arsenal had every right to be ahead. The way they moved and how hard they played pushed back a good Leicester team.

Arsenal vs Leicester City: 2nd Half

After halftime, Leicester tried to get up high to find a way through, but the Gunners were determined to block the passing lanes and win their duels. But it only took one mistake for Leicester to get back into the game. Evans sent a long pass into the penalty box, and Saliba headed the ball away as he ran back toward his goal.

But Saliba couldn’t get the right angle, and Ramsdale scored an own goal when the ball got past him.

Arsenal didn’t have to wait long to put themselves back in front by two goals. Leicester’s turn to make a mistake came when Ward dropped a simple ball at Jesus’ feet. Xhaka fired the ball into the goal after making one of his many good runs into the box during the game.

The Gunners were still in trouble. Maddison was a big reason why Leicester had more of the ball and he ran the show for the Foxes from deep. His run up the right side caught Arsenal off guard, and his shot from a sharp angle caught Ramsdale off guard. It was 3-2 Leicester when the ball went between Ramsdale’s legs.

Again, Arsenal answered right away. The home team quickly came back and found Martinelli just outside the box on the left side. He used his left foot to hit the ball, driving it low and across the goal to make it 4–2 Arsenal

Jesus could have made it 5-2 with a hat trick. But the Brazilian will be upset. He missed a clear chance with his left foot 10 minutes before the end. In the end, Jesus and Saka moved out of the way so that Nketiah and Smith Rowe could keep up the pace.

In the last few minutes, Partey hit the post and Nketiah forced Ward to make a few good saves. The game ended 4–2, and the attacking play was good, but Arteta might want to talk to his team about being more solid on defence in some key moments.

The most important thing is that Arsenal’s perfect start to the season kept going.

Is anyone concerned of Martin Odegaard performances, on top of him being our ‘captain’?

We won, & yes on ‘backing the team’, ALWAYS, but Mikel Arteta’s management has to be questioned. Please stop being irrationally positive & attacking us concerned fans.#ArtetaOut#ArsLei pic.twitter.com/kbVSS3NVx6

Such a brilliant football team. Arteta is on a roll.

Tielemans entering the Arsenal dressing room after the match
pic.twitter.com/U0kAYl30FH

Saliba had a bad game bc of d OG. But still we won

When you're no longer defending against ligue 1 fruit vendors 💀 pic.twitter.com/lPNfxjwenY

How can anyone look at this arsenal team, with all its quality and depth and go “yea, I think they’ll finish 5th behind Tottenham and Man U”

Just as predicted after Leno left, Ramsdale would get too comfortable, and that’s were the mistakes would start to creep in. Great result. But we need a better keeper. This guy ain’t it for the long term.

God bless the entire staff of Manchester city for selling Gabriel Jesus to us, kudos to all our boys for giving it all today to secure another 3 important point, we are going for the EPL trophy this season ❤️

Share
Facebook
Twitter
Pinterest
WhatsApp
Previous articleJUST IN: Arsenal and Liverpool Lock Horns To Sign A £67M Rated Player
Next article‘I Had A Lot Of Problems With Him’-Arsene Wenger Reveals The Manager Whom He Hated The Most During His Time As Arsenal Coach