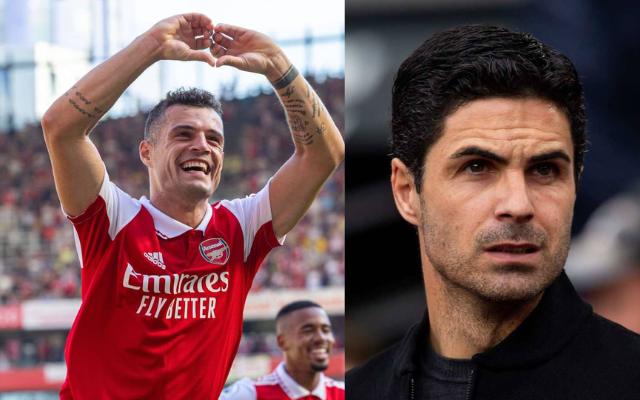 Arsenal looks pretty good with Mikel Arteta yelling at the sidelines. The Spanish coach has single-handedly brought changes on positive notes. he did experiment with formations and players in various positions. With recent performances, the Gunners look unstoppable sitting at the top of the English Premier League. The fans are more than just happy. They describe that it is pure football that pleases them to the core.

Arsenal and Xhaka: Pushing through the darkness to shimmer at the top

Talking about the players, there is no one but Xhaka to praise for this successful form. Granit Xhaka has evolved to his best self. The Swiss International joined Arsenal from Borussia Monchengladbach in the summer of 2016. He has been a consistent starter for the Premier Giants in the middle of the park for the Premier League Giants. However, his form was not stable citing the ill-discipline and rash decision-making in-field.

Since his arrival, Xhaka has been sent off 5 times and he himself admitted that he played it rough. 4 out of his 5 dismissals count in the Premier League itself. It was Mikel Arteta who put faith in the midfielder. The Swiss star began his career in English football mostly as a defensive midfielder supporting the defense line and playing long balls.

Nevertheless, his recent performances tell a different story. The player has developed finesse and ball-control in the midfield. He plays a more attacking role picking spaces in the defense line and rotates the flow of play with Martin Odegaard by his side.

Through the rough patch: Xhaka aged like a fine wine

Granit Xhaka turns 30 years old today as his confident stature prevails in the dressing room. Even though he is no more the captain, his command over the players is ecstatic. Former Arsenal player and legend Ian Wright states that he is pleased with Xhaka as he was the harshest critic

“We are seeing the best of Granit Xhaka,” says Ian Wright.

Arteta effectively improvised his position as an anchor from wing-backs to the forwards. Xhaka is no more the last line of defense. This change in role helped the midfielder to escape the constant pressure as the point of pivot. He now opens up the spaces or rather exploits them to aim for a stunner.

Also, the departures of David Luiz, Alex Lacazette, Pierre Emerick Aubameyang, Sokratis, and Özil have declared Xhaka the sole leader. The Swiss International went through a period of ruckus and disobedience in presence of senior players. Xhaka and Arsenal survived through this period only to see them shine brighter.

Arsenal fans are applauding him for his display of great footballing skills. The same  Arsenal fans booed him out as he received a red card against Crystal palace back in 2019. It is not just the times, it is about the quality of player that Xhaka has always been. He is doing what he does best. His body build seems that he is better suited to thwart attacks but that is not the case.

It's funny because it's true 🎯🤪 #Xhaka #afc #redemption #revival 🔥 pic.twitter.com/tEwB3p0eR5

His reputation has been topsy-turvy as the captain of a big team like Arsenal. Xhaka has stayed to show he can prosper in difficult times. The Gunners and Mikel Arteta can now hope better for this season with them competing for the title.