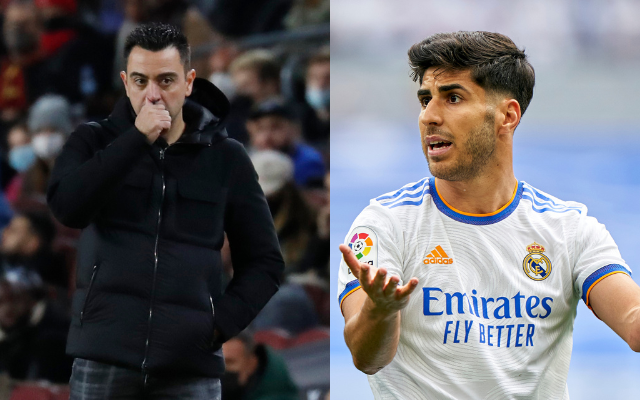 Real Madrid forward Marco Asensio has less than a year left in his contract. He dropped down the pecking order in the team. The Spaniard is neither a regular nor the best option in his position. He works as a substitute to make an impact in difficult scenarios. Carlo Ancelloti has put enough faith in Asensio to trust him with that role.

However, Top European clubs are already monitoring him with his future in jeopardy at the Santiago Bernabeu. Real Madrid is yet to offer him a contract to extend his stay. However, speculations have kickstarted regarding his next possible destination.

Asensio: Unsettled or Lack of Form

The uncertainty over his future loomed since the summer transfer window. Premier League giants Manchester United and Arsenal both wanted to snap up Marco Asensio in the month of August. The transfer talks lasted till the deadline. As the window shut close, the 26-year-old opened up about his decision to stick with Los Blancos. He expressed his gratitude and trust in Real Madrid gaffer Carlo Ancelloti.

“Ancelotti’s confidence in me was key. I still believe I can help Madrid and I want to keep winning trophies. There were options [to leave in the summer] but I never really thought I would leave and Ancelotti was part of the reason why.” Source: ESPN

With Brazilian starlet Rodrygo and midfield tank Fede Valverde, Asensio has found it difficult to settle for a spot in the first team. He was vocal about the possibility of him signing a pre-contract in the month of January, as per COPE’s El Partidazo.

Top Clubs to fight for the Real Madrid forward

Marco Asensio chose to comment on his links for a move to Barcelona among all the top clubs in Europe. Barca manager Xavi Hernandez seems much interested in the right winger. He thinks he can utilize Marco Asensio to his full potential as he builds his new squad. A switch to the rival side could cause some serious between the fandom.

Marco Asensio played down the rumors telling the media it is quite obvious with his contract running down in 2023. He also told that he is not pretty sure if the Blaugrana really needs him or not. Citing the recent events, the move to Barcelona looks lucrative. The former Mallorca player added that he received about 200 messages from his friends questioning his next favorable destination in Europe.

The Spaniard rose through the ranks with stellar performances resembling the next big thing in European football. Having made over 239 appearances for the Great Whites, it is going to be a tough decision for Asensio to leave. During this period, he racked up 50 goals winning the Champions League and La Liga three times each.

Even if he made just 4 appearances this season, he is still considered prolific with a brilliant skill set. Hence, there are enough potential suitors for his signature. Barcelona already has Raphinha and Ousmane Dembele playing quite well in the same position. Clubs like AC Milan, Juventus, Manchester United, Liverpool, and Arsenal will vie with Barcelona to sign Asensio.