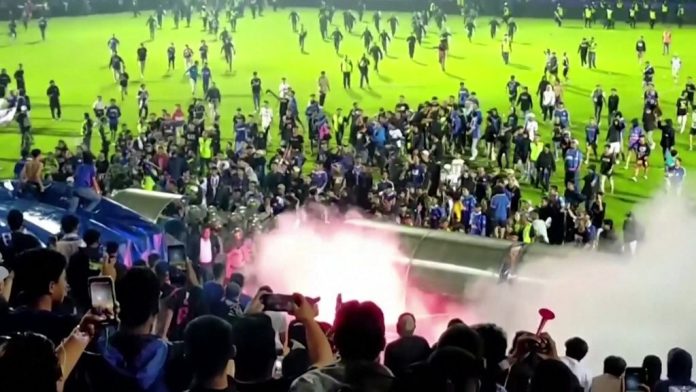 Indonesian Football Wants To Forget This Black Day!! Pitch invasions have never been a thing that would make any smart footballing fanbase happy. Whether you do it for the rush or just do it to vent the anger out, the consequences can be dire at times. In the past, there have been quite a few incidents globally that suggest why these are a threat to, not just the players and their coaching staff, but the fans themselves as well. Keeping that in mind, it’s happened again!!

This time the country is Indonesia. The tragic news has been doing the rounds across media platforms and Social Media forums. However, the main reason for covering it right now is the fact that there are some factual errors in what some of the outlets are reporting.

So What Was The Exact Tragedy That Struck Indonesian Football And Sent The World In Shock!!??

The incident took place in the city of Malang in Java in Indonesia. The match was between Arema FC and Persebaya at Kanjuruhan Stadium. As per our sources from the city, one the fans of the home side (Arema FC) were allowed in the stadium. This was in order to avoid any potential conflict between the two sets of supporters.

Now, while some of the other sources have been stating that there were some conflicts or brawls going on within the stadium between rival fans, our source tells us that there were only one set of supporters. The problem was that the home side, Arema FC, lost the game to their bitter rivals.

Fans in the eastern city of Malang just stormed the pitch post the match. It was a 3-2 loss for Arema, their first in more than two decades to Persebaya. Now, due to the rivalry that the two teams have, the fans of the hosts lost their cool.

The police tried to bring the situation under control to the best of their abilities. They requested the fans to return to the stands but to no avail. It was declared a “riot” situation, after the killing of a couple of officers in uniform. This escalated the matter and the police had to resort to the use of tear gas.

So What Happened Eventually In This Whole Situation That Took Place On Saturday?

Once the tear gas was used, it made things worse. This led to a stampede in the stadium and the fans let loose. The police confirmed that many of the victims were trampled to death. Many were crushed and suffocated as they ran towards one exit. This was confirmed by the representatives of the police present.

Images taken showcased loads of tear gas in the stadium. They also showcased how the fans were clambering over fences to get to safety. However, this did not help their case.

East Java police chief Nico Afinta confirmed on Sunday, “In the incident, 127 (latest toll 182, updated on Sunday evening) people died, two of whom are police officers. Thirty-four people died inside the stadium and the rest died in hospital.”

An apology was sent out by the Indonesian government. But it was too little too late. They promised to do an investigation around this situation involving Indonesian football. It just looks shameful, with the whole world watching. 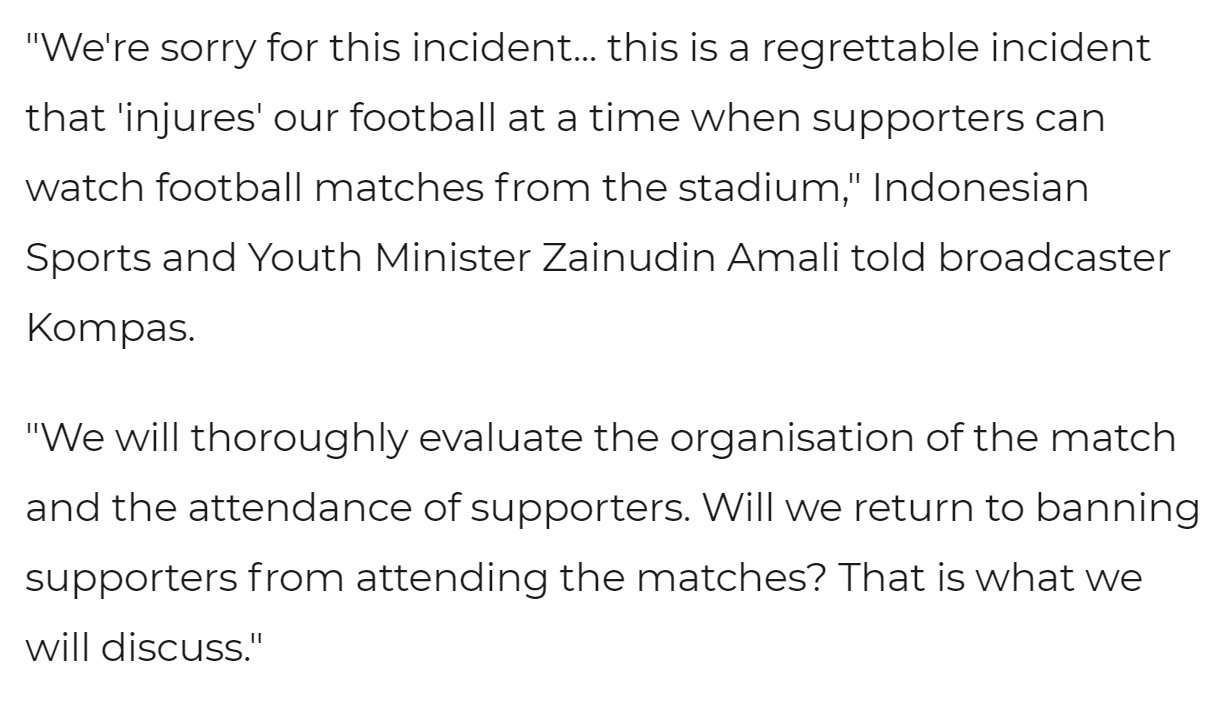 The Football Association of Indonesia (PSSI) has suspended matches for a week. It has further decided to ban Arema FC from hosting any more games this season. On the other hand, they have added that they will be sending a team to Malang to investigate the whole matter.

PSSI chairman Mochamad Iriawan said, “We are sorry and apologize to families of the victims and all parties over the incident.”

This is not the first incident in Indonesian football and certainly it won’t be the last. Fan violence is very common in the country and this is a problem. At times, rival players of away teams have to travel with heavy security due to these reasons. This showcases how brutal the nature of the “beautiful game” can be in some countries.

However, such incidents should be condemned and we at Beyond The Posts hope that it will never happen ever again!! Be safe football fans!!