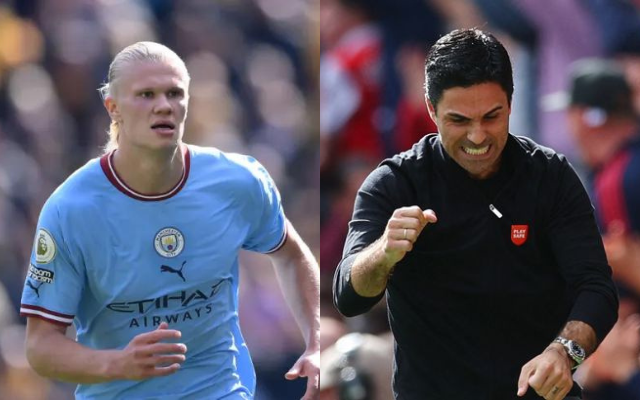 Calciomercato says that Arsenal and Liverpool have joined the race to sign Andreas Schjelderup from Nordsjaelland. The 18-year-old has been called “the next Erling Haaland” because he just joined the club’s first team and scored five goals in his first 10 games.

It could help the Gunners make up for the fact that they missed out on Erling Haaland when he was at FK Molde a few years ago. John Vik, who used to be the head scout for the Norwegian club, told the Athletic: “When English scouts saw Erling Haaland, a big striker, they saw a target man, and I think they forgot to look at what else he could do. He could have gone to Liverpool. He could have gone to Arsenal.”

It turned out to be a huge mistake, as Haaland went on to join Borussia Dortmund, where he kept getting better until this summer when he moved to Manchester City. The deal only cost about £50 million, plus a lot for his agents, and he has fit right into the Premier League.

Since he joined the Citizens, the 22-year-old has scored 17 goals in 11 games. He gave a team that was already looking like it was going to win most of the game that extra edge. After the 6-3 win over Manchester United, the striker said, “We always want to move forward. We always want to attack, and that’s what I love about the team.”

Even though Arsenal didn’t get him, they were able to get Gabriel Jesus from Manchester City in the summer window. Every time the Brazilian has played in the Premier League this season, he has helped score a goal.

If Mikel Arteta wants to build on the work he has just started, he will need to keep putting young players on the team. The move to sign Schjelderup could help them do that and make up for the fact that they let Haaland get away from them.

The transfer window may only be open for a certain amount of time, but the market is always open. Clubs are always looking for good players to add to their teams, and they often find names that could be a real gem in the future.

Top clubs are always looking for young players who are ready to step up to the next level. Andreas Schjelderup, a star for Nordsjaelland, is one such player. The 18-year-old star has already been called “the next Haaland” because he looks a lot like Manchester City’s current striker.

Will the deal go through?

Schjelderup has already caught the attention of some of the best clubs on the continent. He has had a good start to the season with Nordsjaelland, scoring five goals and setting up one. The Italian teams Juventus and Inter Milan are showing interest in the 18-year-old and could make a move for him soon.

Sevilla has already talked to Nordsjaelland. The talks have become more serious after they rejected a €4 million offer. The Norwegian team wants at least €20 million from interested parties for their 18-year-old star player, who is under contract until 2024.

In England, Mikel Arteta and Jurgen Klopp are both showing interest in adding more young talent to their teams. So Arsenal and Liverpool are showing interest in Schjelderup. Also, strikers are hard to find, so every top club will want to sign a young player who is highly rated.

Share
Facebook
Twitter
Pinterest
WhatsApp
Previous articleNot The Complete Truth; Facts About The Incident In Indonesian Football Revealed
Next articleDeadpool 3: How Is The MCU Bringing Back Wolverine, After The Death Of The Character In 2017?