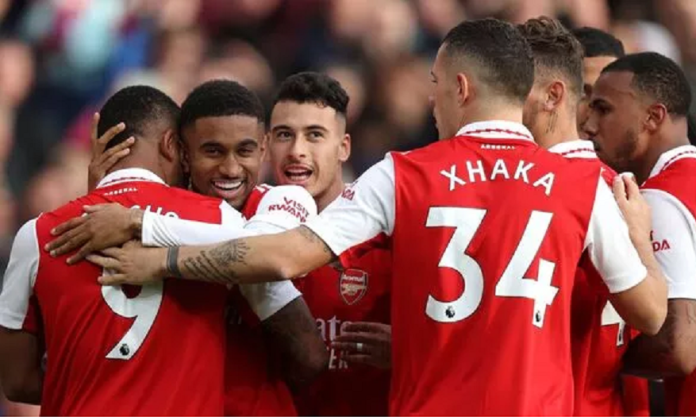 And all of a sudden, Reiss Nelson is a celebrity now. The player who is still trying to leave his mark on the team has made a significant contribution in one game, making him the talk of the town. He was returning from a long-term injury and his previous loan spells that could have resulted in something significant.

Though nothing can be taken away from his brilliant overall performance against Nottingham Forest, the Arsenal fans will be eagerly hoping for more. It has been a brilliant start to the new season for the Gunners. They will be keen to get something out of it for sure.

Manager Mikel Arteta finally looks settled and the effect is showing. This would have surely made the Arsenal faithful really happy. Further, the young guns of the Gunners are also firing. This gives them an added incentive to do well this term.

What Was The Verdict Given By Arsenal Legend David Seaman on Reiss Nelson!?

Former Arsenal goalie David Seaman is known to voice his opinions. He lets the fans know what he thinks about a particular player or incident or more. With that being said, Seaman has given his verdict about Reiss Nelson in all this talk about the player.

A lot of media outlets and Pundits are talking about the winger’s impact in the game against Forest. Though Seaman is impressed by the contribution of Reiss Nelson as a super-sub, he just feels there is someone better than him in the squad. That is, in terms of overall quality. And the player is a fan-favourite too (well, at least was before).

The player in his comments is none other than Emile Smith Rowe. The attacker recently underwent surgery and is now recovering. He will be back in action post the World Cup in Qatar. Reiss Nelson is going to get a lot more chances with his compatriot out of action for some time.

With that being said, Seaman wants Nelson to improve and outshine Smith Rowe. That is a big ask in itself, after the impact the latter has had in recent times. However, if one player can do it, it is surely Reiss Nelson.

What were the exact comments made by David Seaman on this whole matter on his Podcast Seaman Says?

David Seaman spoke in his recent Podcast and said: “I do not think Smith Rowe is that close yet to be honest. Because I think he had an operation. He will be out for a bit longer than what we first thought. Sunday is a little bit too early because he has not played. You would have expected him to play in a European game or something like that before going into that.”

“So he is out of the picture for a little bit longer. But if they are both fit, Smith Rowe gets the nod.”

Well, it is good for any team to have healthy competition amongst their ranks. That is exactly the case with Arsenal right now, who are getting more or less everything right. With Reiss Nelson suggesting recently that he wants to extend his contract with the Londoners, it will be interesting to see how things develop in this story!!