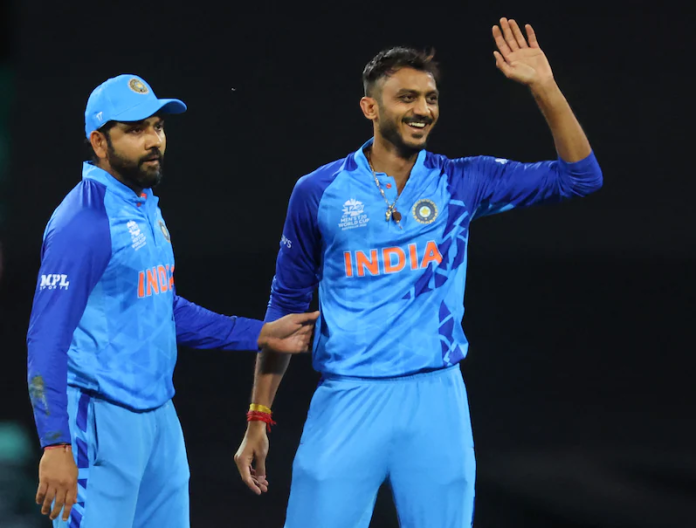 When a player isn’t firing, the fans of that particular team are surely bound to be concerned. That is the case with Indian all-rounder Axar Patel, who has found it tough to produce results in Indian conditions. The fans were concerned watching him bowl, with no real contribution with the bat. With that being said, there are a couple of crucial games coming up in the T20 World Cup; the semis and the finals.

If Indian were to beat England in the semi-final, surely the Indian spin department would have to play a crucial role. However, with the way spin has been battered in the tournament so far, it is quite complicated.

With that being said, Team India and Rohit Sharma (including Rahul Dravid), have neither played Yuzi Chahal nor Harshal Patel in the tournament so far. This is a huge concern and the fans can’t stop expressing it.

What are the numbers that the all-rounder has showcased in the tournament so far?

Wisden Cricket recently sent out a Tweet showcasing the numbers of the Indian all-rounder. His form, both with the bat and the ball, is a serious concern. With that being said, the fans will be hoping that Rahul Dravid and co. have a solid plan for the semis. This is something that we always see when the INDIAN LEGEND talks in his interviews.

Axar Patel has played four matches in the #T20WorldCup but has sent down only 9.2 overs. he has also scored a total of nine runs.

With England having a number of left-handers, should India play him in the semifinal? pic.twitter.com/aoTyKi4y0j

The two games that remain, the semis and the final, can’t be left to chance. A proper plan needs to be in place. These numbers are not really convincing and the likes of Deepak Hooda and Harshal Patel have not been properly utilized either. So, the concern from the honest Indian fans is really justified as of now.

Here are some recent Tweets sent out by the fans to let their opinions about Axar Patel be known!!

What exactly is Axar Patel’s role in this XI ? Can neither bat not bowl.

Axar Patel in this WC pic.twitter.com/wQMum8i3nP

Almost every team knows by now that Axar Patel is the guy to target in the Indian bowling.

Axar Patel is such a fraud, man.

Jadeja has been injured quite a lot in the last few years, but he’s missed only home tours for the most part. Axar statpadded wickets nicely in his absence at home.

Everyone has hit on Axar Patel in Australia – unfortunately for him, none of them have been women

Axar Patel is not even 10% of Washington Sundar

Axar Patel is having a tough World Cup 😬

I think Axar Patel should be must replaced by Chahal in next game. Till now he has almost given zero contribution with batting & bowling. He is clearly struggling in these Australian pitches.#INDvsZIM #T20WorldCup pic.twitter.com/Kboi6HrrHH

I don’t understand why Axar Patel is being played every match… he is hardly contributing and gets whacked by one and all.. his batting has been nothing much to talk about! Rather we need another fast pacer!

I don’t understand why Axar Patel is being played every match… he is hardly contributing and gets whacked by one and all.. his batting has been nothing much to talk about! Rather we need another fast pacer!

Not sure why is Axar Patel picked everytime. He is just not suited for these wickets…

With the fans not holding back, former England spinner Monty Panesar, Tweeted this out too-

The way Axar Patel bowled today ,India may give Yuzvendra Chahal a chance and it allows Rishabh Pant to play to strengthen the batting. #News18IndiaNumber1 #T20WorldCup #INDvsZIM https://t.co/yvCksuKOum

Well, the fans do have hope that the Team management will take the necessary call. Whatever it is, at the end of the day, WINNING is the main goal. Axar Patel or no Axar Patel, the plan is to move forward into the finals. Let’s wait and watch now!!

Share
Facebook
Twitter
Pinterest
WhatsApp
Previous article“Big Plans In January At The Emirates”, Arsenal Has Planned 4 Huge Signings In The January Transfer Window
Next article“BOOM! £65 Million Deal To Be Done?”, Arsenal Start Determined Talks With The Winger For A January Signing