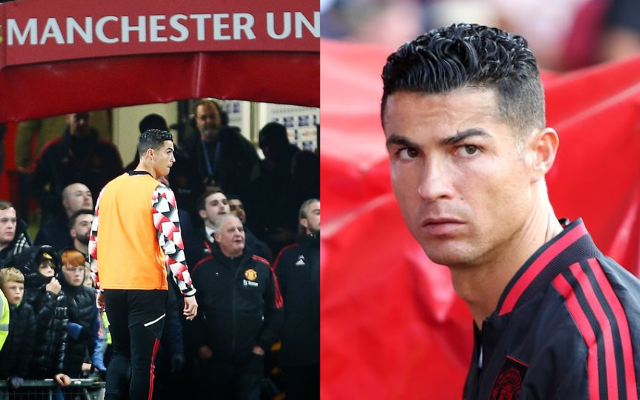 While the footballing world is looking forward to the World Cup in Qatar, Cristiano Ronaldo is not making HISTORY this time. Rather, he is trying to create CONSTROVERSY instead!! When no GOALS or ASSISTS come your way, create the next best thing. CONTROVERSY. Make people talk about YOU to stay relevant.

Though Cristiano Ronaldo has not been known to do so just for the sake of it, this doesn’t feel right. Can a player in his Twilight not accept that he isn’t good enough to be starting games anymore?? Does he have to be humiliated by someone to understand that??

Or in this case, does he have to make a STATEMENT by WALKING OFF THE PITCH!!? Without asking anyone or informing anyone?? CR7 wants respect but can’t handle the FACTS!!

For anyone who thinks that Piers Morgan actually gives a damn about Cristiano Ronaldo, needs to read some of his older headlines. Stories where he criticized the Portuguese international badly, during his previous stints with other clubs. Especially, an article that recently got the attention of a lot of fans.

So this is Piers Morgan..Cristiano Ronaldo’s SO-CALLED FRIEND some time ago!! Hahaha!! Shameless af!! #Apoz pic.twitter.com/wdlUsZ9Mum

Piers who only goes where he gets two things. MONEY and ATTENTION. He is a self-proclaimed Arsenal fan, though most of the fanbase doesn’t even want him!! Or like him!! He is just a FILLER as per many. Not to further question his JOURNALISTIC MOTIVES in the recent interview with Cristiano Ronaldo.

This is something that was also highlighted to an extent by talkSPORT. Piers Morgan calls Cristiano Ronaldo his friend and he was the same guy who took the interview. On his call with the news broadcasting channel, he claimed that Ronaldo had called him to express his opinions.

He wanted to let it all out and picked Piers Morgan, as he likes him. Something that is really hard to believe and even the members of the cast found it really funny!!

🔥 “He knows it’s going to be incendiary but he feels he should be doing this.”

🙏 “He loves #MUFC & the fans but feels if he doesn’t speak nothing will change.”@PiersMorgan explains how and why his interview with Ronaldo happened. pic.twitter.com/VGJMDs80ex

Not looking good for Cristiano Ronaldo, as the Manchester-based side have just fined him. A report coming out reveals that the star striker will be fined a sum of £1m. Though the amount is nothing great for the talisman, it is just the club imposing their will on things.

They don’t want this example to be followed when the team is trying to change the culture at Old Trafford under new boss Erik Ten Hag. To add to that, another Tweet confirms that the club has every right to terminate his contract. Whether they do it or not, will be their big call to make.

Cristiano Ronaldo tried to leave the club in the summer. However, no team wanted to pay the money for him. He may try to once again make the money if things don’t work out. Whether an exit is on the cards or not, remains to be seen. For now, the players will be focused on the World Cup that follows.