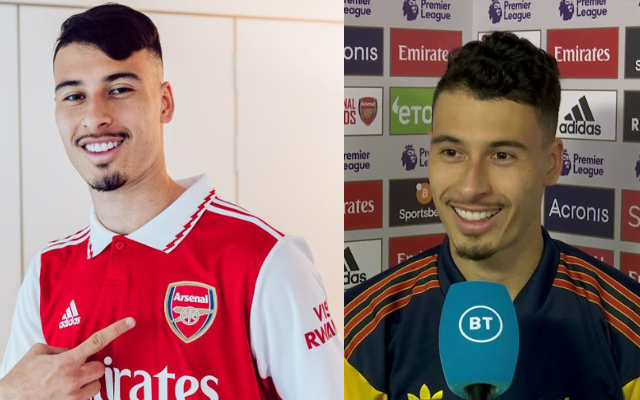 Latest Arsenal News: Arsenal have been doing really well this season. The current campaign is in a mid-season break with the World Cup going on in Qatar. With that being said, some of the Gunners’ stars are at the competition. They will be keen on making a name for themselves in the tournament.

It is a grand stage and there wouldn’t be a player that wouldn’t want to make their country proud. It is a big moment for all stars, big or small. One such star player at the FIFA World Cup is Arsenal’s Gabriel Martinelli.

The young Brazilian winger has made the trip to Qatar. He may not get regular game-time but will want to soak the experience in and grow as a player. Brazil are favourites to win the tournament (as per bookies). So, who wouldn’t want to be part of the team right now!!

Latest Arsenal News: The Story About Gabriel Martinelli And Pierre-Emerick Aubameyang, As Told My The Young Winger

The Arsenal players have always had a good bonding since Mikel Arteta took charge. Most of them were/are even good friends. The culture in the dressing room is really good as well. Fans are loving this and there is a wave of change at the club at present. And things are looking good for Arsenal, who are on top of the League table.

Keeping that in mind, youngster Gabriel Martinelli recently shared a tale with the fans. It was about a really touching moment with former skipper Pierre-Emerick Aubameyang.

A recent interview with The Players’ Tribune was where Martinelli revealed something important. Martinelli explained his decision to snub Manchester United and Barcelona to join Arsenal. He described it as a touching moment between himself and Aubameyang. This was after he arrived at the Emirates back in 2019. The Brazilian international said, “I remember that I went to lunch. There was, for example, where I was afraid because I did not speak English.”

“I would think, ‘Imagine if someone sat next to me and talked to me, what would I say? I was embarrassed, right, because the person speaks, you want to speak, but you can not. Sat down to eat, and then Aubameyang arrived. I thought, ‘now what?’ Then he sat down next to me and started talking to me in Spanish.”

“A good guy, I think that moment… Was very nervous. Like for him, it was something normal. Maybe he does not even remember this, but for me, arriving at the club now, Auba coming to talk to you, sitting at the table with you, it was something that will stay with me forever.”

What Next For The Gunners As The World Cup Continues!?

At present, the North London giants are on top of the table. As per the latest Arsenal news, they are keen on competing for the League title. With that being said, Arteta will be hoping that all his players are fit when they return home from the World Cup.

This season is quite interesting already and the fans will be keen to see how things develop now. Only time will tell!!

Share
Facebook
Twitter
Pinterest
WhatsApp
Previous article“€50 million Sent”, Arsenal To Beat Liverpool And Chelsea For The Biggest Signing Of January Transfer Window
Next article“I Will Leave For PSG”, Arsenal Star To Leave For PSG At The End Of The Season?