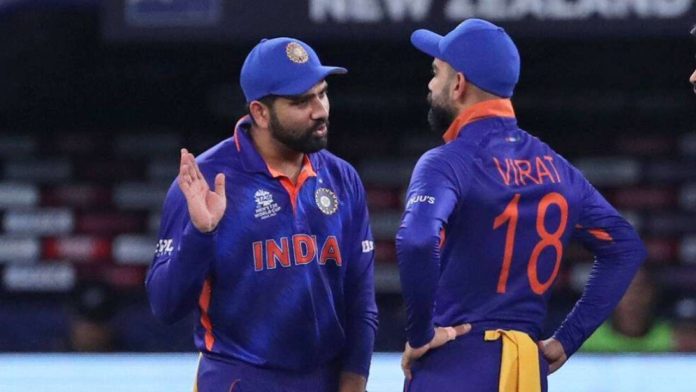 T20 World Cup 2022: In the opening game for both India and Pakistan, in a house-full MCG, Virat Kohli did what Virat Kohli often does: defy the odds and changes the narrative with every swing of his willow. In a high-voltage encounter against Pakistan, Kohli once again summoned the powers of his vintage self. This was enroute a majestic 82* of 53 balls, taking India home when all hope seemed dead and buried.

Such was the magnitude and mastery of that innings, even Pakistan fans were in awe and respect of the man. With the way Kohli played, it felt like it was Kohli who beat Pakistan and not India, as per a section of the Pakistan fans.

Keeping in with that theme, one Pakistan fan by the name of Haroon went on to Twitter to put a rather tricky question. He asked, “Once Virat Kohli retires, how will India compete against Pakistan?”.
Now this question is a bit far-fetched to be honest. That is, with India having earlier put Pakistan under the cosh with their superb bowling. The pacers were successful in dismissing their openers in no time to leave them reeling.
But the question did hold weight as far as the batting was concerned. There was no one bar Kohli who scored top runs right through the tournament. And to an extent Hardik Pandya was the only other one to put a semblance of fight against the formidable Pakistan bowling attack.

T20 World Cup: The Perfect Response To The Question Posted By The Pakistani Fan

We’ll, naturally this question did get traction, with a lot of people having their say on the matter. However, one Indian fan came up with an absolute peach of a reply to put Haroon in his place.

The reply was from Johns, who is an Indian cricket afficionado. Replying to his question, he posted a picture of a recently contested U-19 game between India and Pakistan. It is where Pakistan were shot down for 69 in response to India’s 272. A young Shubman Gill took charge and announced himself onto the world stage. It also served as the answer to the question, with Gill being the one to take the mantle forward, and rightly so.
But for now, it is time to take a moment and give Virat Kohli his flowers, because we are certainly witnessing greatness. And you can be sure that this will be the first of many knocks of quality and class in this tournament. The rest of the group has been put on notice. The king is coming for his crown, and the whole world is on notice.

Why Was He Not Picked For The T20 World Cup In Australia?

The big question now remains as to why Shubman was not picked for the tournament in Australia. KL Rahul was struggling for form post his return from a long-term injury. In this case, another backup opener was needed amongst the Indian ranks. However, neither he, nor the likes of Prithvi Shaw, nor Ruturaj Gaikwad were picked.

Also, Rishabh Pant was wasted in the lower-middle order when he could have been utilized up top. This is something that hurt the Indian side at the end of it all. Their starts were poor and the top teams managed to capitalize on this weakness. Hopefully, things change in the near future for the Team In Blue.

Share
Facebook
Twitter
Pinterest
WhatsApp
Previous articleRevealed: Real Reason Why Sania Mirza And Shoaib Malik Are Not Together Anymore
Next articleRevealed: The Only Positive Thing That Gary Neville Has Said About Arsenal This Season