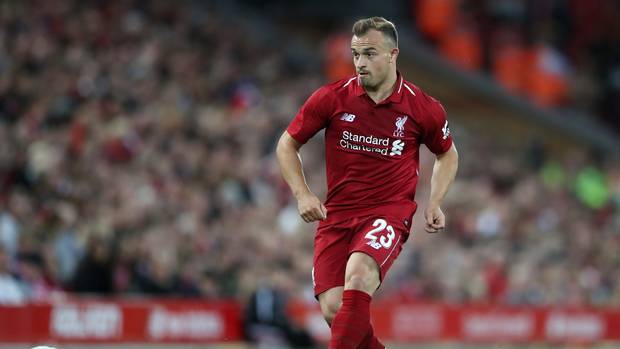 According to the Dutch centre-back Virgil Van Dijk, Xherdan Shaqiri’s inclusion in the squad of Liverpool is giving them a new dimension in the attack in this season. Jurgen Klopp has been trying to introduce a new formation and Xherdan Shaqiri is playing an important role in that. Liverpool club management have brought in Xherdan Shaqiri in this summer transfer window of 2018-19 season from Stoke City. The move was imminent as the former club of Xherdan Shaqiri, Stoke City had been relegated from the Premier League in the previous season.

However, Xherdan Shaqiri was not getting enough chances in the starting lineup of Liverpool at the beginning of this season as Jurgen Klopp used to keep faith in his old 4-3-3 formation at the first part of the season. The attacking trio of Liverpool have not been performing up to the mark in this season. Sadio Mane, Mohamed Salah and Roberto Firmino are nowhere near their blistering form of the previous season. That’s why, the manager of Liverpool, Jurgen Klopp is starting to think about the change in the formation of the Reds.

The Swiss Messi has not travelled with the squad of Liverpool to play against Red Star Belgrade in Serbia. Xherdan Shaqiri has the Kosovo Albanian origin. Kosovo is an independent state; but Serbia do not recognize them as an independent state. The things got fire when Xherdan Shaqiri celebrated his goal against Serbia in the recently concluded World Cup in Russia with a sign of the dependence of Albania. Jurgen Klopp stated that the club management did not want any inconvenience due to this reason. That’s why Xherdan Shaqiri was excluded from the squad of Liverpool against Red Star Belgrade.

However, the former Stoke City player was in the starting lineup of the Reds against Fulham on Sunday in the Premier League. In this match, Jurgen Klopp opted to change his formation a bit. Liverpool played with a 4-2-3-1 formation in the match against Fulham. Mohamed Salah was playing as the number 9 role while Sadio Mane was at the right and Xherdan Shaqiri was at the left flank. Roberto Firmino was playing the role of number 10 and was just behind Mohamed Salah. This new formation has certainly given Jurgen Klopp flexibility in the match.

In the midfield of the Reds, they are certainly missing the service of Alex Oxlade Chamberlain in this season. Fabinho is a new addition in the side and he will certainly take some time to settle into the Premier League. Naby Keita and Jordan Henderson are recovering from their respective injury problems. So, in this circumstances the inclusion of Xherdan Shaqiri in the first team of the Reds are giving them a new dimension in the attacking third. Shaqiri also scored a goal in this match for Liverpool which sealed the 2-0 win of Liverpool against Fulham on Sunday. Virgil Van Dijk believes that the left foot of Xherdan Shaqiri can make wonder if he can get regular chances in this Liverpool side throughout the whole season.