Chelsea boss Maurizio Sarri was interested in bringing in Gonzalo Higuain, who is currently on loan at AC Milan from Juventus. However, Chelsea’s hopes of landing the Argentine striker appears to have taken a hit. Juventus chief Fabio Paratici rubbished the chances of Higuain cutting his loan spell at AC Milan to join the Blues. Chelsea are desperately in need of firepower up front with players like Alvaro Morata, Willian and Olivier Giroud all misfiring, Sarri felt Higuain was the man who could be the ideal man at Stamford Bridge.

Although the club have signed Christian Pulisic recently, Sarri won’t get the services of the United States international this season. Pulisic has been loaned back to Borussia Dortmund till the end of the season. Hence it does not addresses the problem with their frontline this season.

The Blues struggling in front of goal and seems like it is on Eden Hazard’s shoulders to bail them out in every match. Their recent game ended in an underwhelming 0-0 draw against Ralph Hassenhutl’s Southampton.

Sarri feels Higuain can be the man answering all their problems and hence the Argentine forward was linked in the summer as well. Sarri strongly believes that the 31-year old can be the player as Higuain himself has excelled under the Italian during his days at Napoli. Hence reports suggest that despite the complications the Blues are in with a shout to lure the Argentine from Serie A. 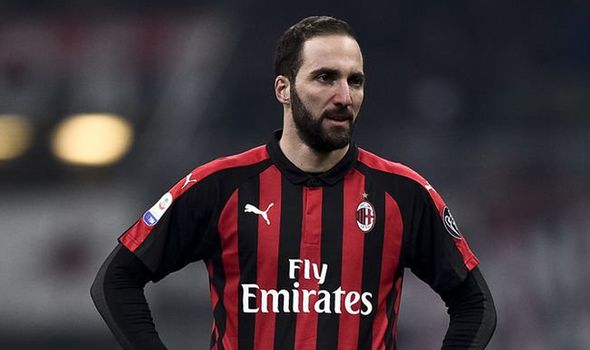 However AC Milan can make the deal permanent for their currently on loan forward, but the Rossoneri are yet to indicate Juventus whether they would like to tie him down permanently at Milan. It would require another £32m on top of the £16m they have already spent while signing him on loan at the first place.

Chelsea’s interests have taken a major hit as Juventus sporting director Paratici have dismissed the chances of the Argentine joining the Premier League side.

“About his future, I think he’s important for AC Milan, he is a great striker and they want to keep him.”

Higuain has netted eight goals for the Rossoneri this season but only once in his last 10 matches across all the competitions. Despite the sudden goal drought, Paratici feels that does not show the true capabilities of the 31-year old forward.

He added: ”I know very well Gonzalo, he is a simple and passionate guy who lives every situation with great enthusiasm.”

“It can happen even to the best players not to score for four or five games.”

The deal is more complicated than it seems for the Blues and hence there are also reports suggesting that Chelsea may look for alternatives for Gonzalo Higuain. One of the top targets in the alternative list is Mauro Icardi. Higuain’s compatriot has made his name for Inter Milan and proven his mettle for the Nerrazurri over the years. Hence the Internazionale captain is heavily linked with the Londoners.

Sarri was clear about bringing in reinforcements after the Southampton match. The Italian seemed frustrated with the forward squandering chances throughout the game, which ended in an underwhelming 0-0 draw. Sarri mentioned that the club knows his targets as he feels Chelsea needs a player with different characteristics in the final third.

“The club knows my position, my opinion. It is up to the board”, Sarri signed off.

Latest Update On The Future Of Chelsea And Manchester United Targets,...

All That You Need To Know About Chelsea’s Trip To Selhurst...