The Virat Kohli Story- The Indian cricket fans have been divided after seeing Virat Kohli’s doppelganger in the field in the 3rd T20 International at Sydney Cricket Ground. The fans have given different reactions in social media after seeing the man in the crowd. Few reactions have been very much positive and the others are as usual a bit negative. Some of them have compared the doppelganger of Virat Kohli with Babar Azam. Few of them have shared a meme with trolling Virat Kohli’s captaincy. However, the atmosphere at the Sydney Cricket Ground has been brilliant throughout the whole game.

The chants have been on throughout the whole match. Virat Kohli’s doppelganger’s reactions have been shown on the giant screen and after that Virat Kohli’s face has been displayed. The audience has certainly enjoyed the whole moment inside the field.

The Video Of The Doppelganger Of Virat Kohli That Went Viral 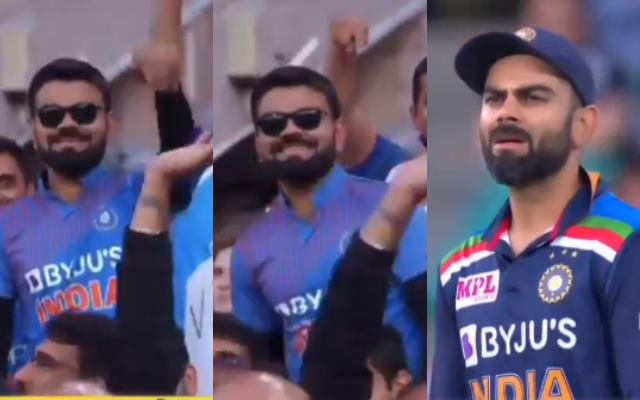 The fans have been allowed to get back into the stadium as the Government of Australia has been able to control the cases of COVID-19. After getting back to the field, the audience has been really happy. Their energy level has been transmitted to the players and it motivates the players to push themselves more in the field. Previously the Indian guy’s proposal to the Australian woman in the stands has got viral. The Indian Cricket fans have shown their encouragement to the couple for their upcoming future.

The audience has certainly enjoyed the whole match. Aaron Finch has made a comeback in the T20 format after missing the second T20 game of this series. Australia has been desperate to avoid the whitewash in this T20 series. Matthew Wade has been in great form in this T20 series. After scoring a brilliant 50 in the previous match, Wade has scored 80 runs in this match. Glenn Maxwell has also been good with his fifty in this match. India could have restricted Australia if they have utilised the opportunities came into their way. Virat Kohli has decided to take the review after seeing the replay. However, the umpires have not allowed him to take the review. Glenn Maxwell has also given his wicket to Yuzvendra Chahal. However, after the replay, it has been given a no-ball.

Kohli as Kohli as
a batsman a captain pic.twitter.com/bwxe0QGMap

The Performances That Caught Everyone’s Attention

Yuzvendra Chahal has been sensational in the first T20 match. However, his form has dipped a bit in the next two games of this series. T.Natarajan has been the best bowler of India in this T20 series. In the second T20 match, he has conceded only 20 runs and he has taken two wickets. Hardik Pandya has been awarded the Man of the Series award. Hardik Pandya has told that T. Natarajan is the deserving candidate for this award. The player has performed really well in his debut series in Australia.