It has been only his first season at the Stamford Bridge and it seems that it may not go further this season. Maurizio Sarri, the former Napoli manager arrived at Chelsea this season after the sack of Italian manager Antonio Conte. Where Conte loved to play off the route by implying a formation of false nine, Sarri is a little conventional one. Sarri prefers to go with attacking 4-3-3 formation where he uses three forward players. Sarri brought Jorginho with him from Napoli which was highly appreciated by the Chelsea fans. Though the manager started quite well in the beginnings soon Sarriball stopped to roll.

Chelsea have been put down to the sixth position of the league table after the humiliating defeat against Everton before the international break. Richardson and Sigurdsson scored for their side and Chelsea got defeated by a 2-0 margin. Though the defeat didn’t stop there as rumours became so high that Chelsea can sack Maurizio Sarri during the international break after another poor display against Everton.

Sarri is believed to be under pressure in west London after facing a disappointing first season in charge. The Blues are all struggling to finish a top-four land in the Premier League. They look set to go without a trophy this season unless they win the European trophy Europa League.

Former Napoli boss was only appointed back in the summer and Chelsea paid £4.4m to acquire him. Sarri was appointed after the Blues sacked Antonio Conte at an estimated cost of £9m.

However, Chelsea moneyman Roman Abramovich might now use the international break as space to sack the Italian manager and bring in a new manager. It could well be a smart move for Chelsea to ditch Sarri now.

Chelsea have been appeared in disarray for much of the season under the Italian manager and a loss of 2-0 at Everton to pile more pressure on the boss, though there has been a slow recovery in recent weeks. 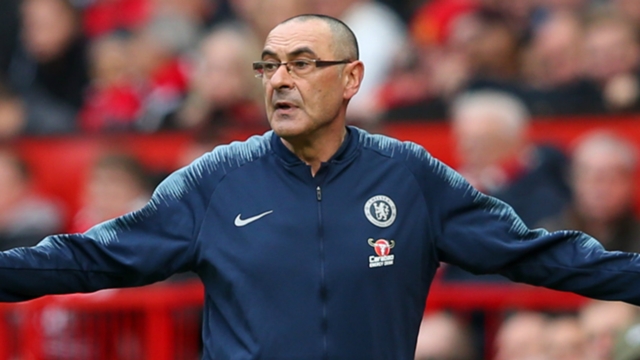 It was very strange and they stopped to defend and counter-attack. According to Sarri, they were in control of the match and they played very well so they needed to continue but didn’t defend at the start of the second half.  Sarri came and changed the system but it gave the same result at the last.

Sarri thinks the problem was mental on the pitch, so the system and the tactics are not important. It wasn’t about motivation because Chelsea started very well as Sarri said. Chelsea have to play eight matches now and they have to fight for our possibilities to regain the top four spot again. The Blues will face Cardiff City and Brighton next in the Premier League and Slavia Praha next in Europa League quarterfinals.