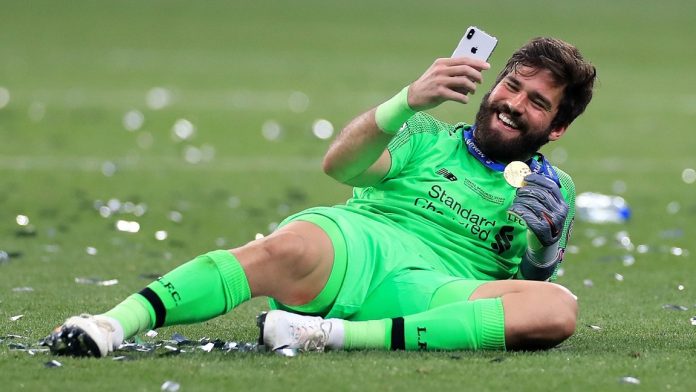 The Story Back Then- Liverpool had extended their unbeaten run to 16 games back then. They took on mighty Everton in the Merseyside derby. The Reds were in red-hot form and were at the top of the league table. The Merseyside outfit had 43 points at that point, thanks to some brilliant performances from their superstars so far this season. Eventually, they earned 82 points, with just one loss and one draw before the pandemic stopped the season.

While the likes of Virgil van Dijk, Mohamed Salah, Sadio Mane have earned their reputes owing to their brilliant performances on the pitch, one cannot dare to undermine the contribution between the bars from Liverpool goalie Alisson Becker. The Brazilian shot-stopper has been in phenomenal form since his arrival at Anfield. He has played a very important role in the success that the Reds have tasted in the last as well as this season so far. His contribution has been hailed by a number of his teammates. The latest to follow in those footsteps is the backup keeper Andy Lonergan. The third-choice Liverpool custodian has nothing but all praise for his team-mates. He has shared his experience of sharing the same pitch with Alisson in a recent interview. According to Lonergan, Alisson is currently the best goalkeeper in the world. He made it evident with a picture featuring him and Alisson on Twitter.

His claims are not haywire, of course! The Brazilian shot-stopper has won an array of awards since joining Liverpool last term. The latest being the prestigious Lev Yashin trophy at the Ballon d’Or 2019 ceremony. This makes him the first goalkeeper to win the award.

Alisson has made 62 appearances for the Reds so far, since his arrival at the Merseyside club. During this time, he has kept a staggering 29 clean sheets so far. His contribution to their success in domestic as well as European stages has been immense. He has proven himself to be one of the top, if not the best goalkeeper in the world at the moment.

Another day working with the world’s best ???#keepersunion #ballondor pic.twitter.com/8jUohx2ixU

The Latest Update Since Then

The Reds are currently in pole position in the Premier League table and are looking comfortable at the top of the table. Leicester City were following them in the second position at that point in time. The defending champions Manchester City were in the third position. However, things changed quite quickly. City went to second and the Foxes dropped to third eventually.

However, it seems that the pandemic could have potentially cancelled the rest of the campaign. The Reds were eager to win the Premier League title. They were just a couple of wins away from a prestigious league title. They have waited for three decades now and will want to win it for sure.

However, it would all depend on what fate has planned for them. The Eredivisie and Ligue 1 have been cancelled already. No football is expected to happen in those countries now. Further, the Euros have been postponed as well. It will be interesting to see how things develop now, in the days to come.

Latest Update On The Future Of This Top Chelsea Target, Blues...

All That You Need To Know About Chelsea’s Clash Against Swansea...